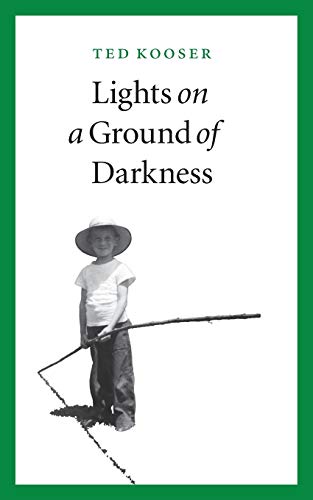 Lights on a ground of darkness : an evocation of a place and time

Like the yellow, pink, and blue irises that had been transplanted from house to house over the years, the stories of poet Ted Kooser's family had been handed down until, as his mother lay ill and dying, he felt an urgency to write them down. With a poet's eye for detail, Kooser captures the beauty of the landscape and the vibrancy of his mother's Iowa family, the Mosers, in precise, evocative language.   The center of the family's love is Kooser's uncle, Elvy, a victim of cerebral palsy. Elvy's joys are fishing, playing pinochle, and drinking soda from the ice chest at his father's roadside Standard Oil station. Kooser's grandparents, their kin, and the activities and pleasures of this extended family spin out and around the armature of Elvy's blessed life.   Kooser has said that writing this book was the most important work he has ever undertaken because it was his attempt to keep these beloved people alive against the relentless erosion of time.… (more)

Local Wonders: Seasons in the Bohemian Alps (American Lives) by Ted Kooser
Winter Morning Walks: One Hundred Postcards to Jim Harrison by Ted Kooser
Flying at night : poems 1965/1985 by Ted Kooser
Delights & shadows : poems by Ted Kooser
The Poetry Home Repair Manual: Practical Advice for Beginning Poets by Ted Kooser
13 more
Leavings: Poems by Wendell Berry
Braided Creek : a conversation in poetry by Jim Harrison
Darkness Sticks to Everything Collected and New Poems by Tom Hennen
The collected poems by Stanley Kunitz
Sleeping it Off in Rapid City: poems, new and selected by August Kleinzahler
The Living Fire: New and Selected Poems, 1975-2010 by Edward Hirsch
The Life and Times of the Thunderbolt Kid: A Memoir by Bill Bryson
This house of sky : landscapes of a Western mind by Ivan Doig
A Child's Christmas in Wales by Dylan Thomas
The Oxford Book of American Poetry by David Lehman
Ballistics : poems by Billy Collins
About Alice by Calvin Trillin
Red doc> by Anne Carson
Fewer