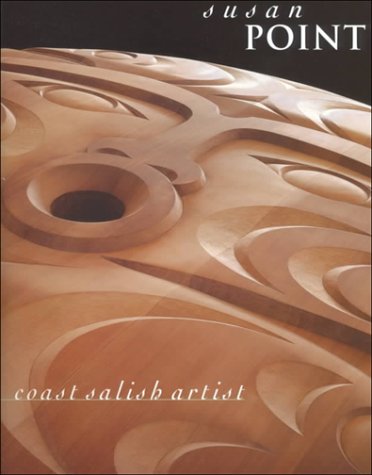 Native American Salish artist Susan Point did not take up art until she was in her late twenties, but since then has immersed herself in the study of traditional Coast Salish art and culture. She says: "Coast Salish art is relatively unknown to most people today as it was an almost lost art form after European contact -- the reason being that Salish lands were the first to be settled by Europeans. Because of this, over the years, I have spent a great deal of my time trying to revive traditional Coast Salish art -- and also attempting to educate the public to the fact that there was, and still is, another art indigenous to the central Pacific Northwest Coast".Point's striking and distinctive art -- from jewelry in precious metals to prints, paintings, and monumental pieces in wood and glass -- has won worldwide acclaim and a worldwide audience. An innovator with a strong personal style, she likes to express ancestral concepts and designs in media such as glass and bronze as well as the more traditional wood. "In creating my art", she says, "I feel a need to continually express my cultural background and beliefs yet, at the same time, my work continues to evolve with changes both within and outside of my community".Michael Kew describes the traditional art, culture, and beliefs of the central Coast Salish, which of all the Northwest Coast cultures is among the least familiar to the general public. Because much of the art was closely associated with private religious expression, it was seldom displayed or sold to collectors. Peter Macnair contributes an engaging and enlightening biography that looks at the artistic evolution of Susan Point. Bill McLennan briefly examines thetradition of housepost carving among the Coast Salish and Susan Point's interpretations of these large woodcarvings.… (more)