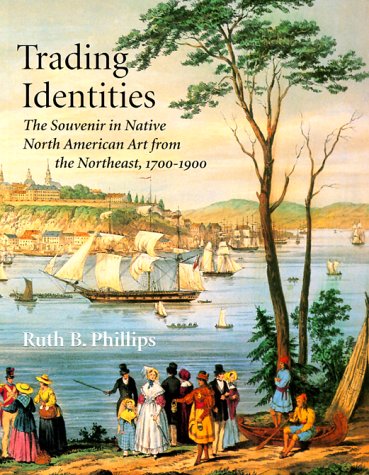 Trading Identities: The Souvenir in Native North American Art from the Northeast, 1700-1900

by Ruth B. Phillips

This book examines a range of art forms produced by Indians in northeastern North America for sale to travelers and tourists during the eighteenth and nineteenth centuries. The Aboriginal peoples of the Woodlands were the first in North America to experience economic and social marginalization and, in consequence, the first to rely on the production of commodities for the tourist trade. These hybrid art forms combine indigenous materials and techniques such as quillwork, moosehair embroidery, birchbark, and basketry with Euro-American genres and styles. Tourist art of the period is generally of high quality and great aesthetic interest. Yet scholars have largely ignored these objects because of their incorporation of Euro-North American influences. Throughout the eighteenth and nineteenth centuries the production, sale, and consumption of tourist art constituted a system for the circulation of objects within which images of Indianness were negotiated. To produce marketable commodities, Aboriginal people constructed images of themselves that mediated European notions of the savage, the natural, and the primitive. By accepting this imagery, colonizers and settlers naturalized their own identities as the rightful successors to the "Indians." While stereotypes of Indianness were being transported into parlors and bedchambers, the objects made for sale were also influencing things Aboriginal people made for their own use. The beaded purses, pincushions, and shopping baskets carried Euro-American styles and concepts into aboriginal communities, together with associated ideas of gender roles and domestic organization. An innovative combination of fieldwork, art historical analysis, and historical contextualization, this study for the first time rigorously compares a Native souvenir production to a wide range of Euro-American decorative arts and home crafts. It identifies the sources of object types and styles and reveals the innovative differences displayed by Aboriginal trade wares. Images newly uncovered in archives and travel literature--including depictions of Native vendors and makers--illustrate the book, along with never before displayed or published objects from museum collections in Europe and North America.… (more)

Kwakiutl Art by Audrey Hawthorn
Native visions : evolution in northwest coast art from the eighteenth through the twentieth century by Steven C. Brown
The American Indian parfleche : a tradition of abstract painting by Gaylord Torrence
From the land of the totem poles : the Northwest Coast Indian art collection at the American Museum of Natural History by Aldona Jonaitis
Ancient Art of the American Woodland Indians by David S. Brose
10 more
Looking north : art from the University of Alaska Museum by University of Alaska Museum.,
The Spirit Within: Northwest Coast Native Art from the John H. Hauberg Collection by Steven Brown
Looking at Indian art of the Northwest Coast by Hilary Stewart
Northwest Coast Indian art : an analysis of form by Bill Holm
Susan Point : Coast Salish artist by Gary Wyatt
People of the river : native arts of the Oregon territory by Bill Mercer
Pictures Out of My Life by Pitseolak,
Smoky-Top: The Art and Times of Willie Seaweed by Bill Holm
The Box of Daylight: Northwest Coast Indian Art by Bill Holm
Chiefly feasts : the enduring Kwakiutl potlatch by Aldona Jonaitis
Fewer