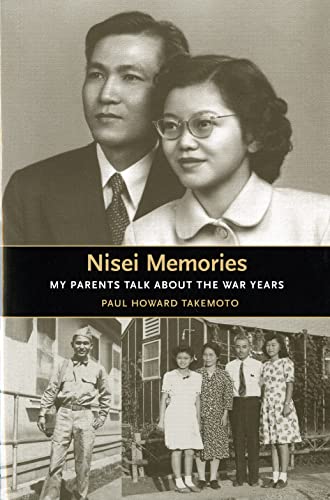 Nisei memories : my parents talk about the war years

Outstanding Title, University Press Books Selected for Public and Secondary School Libraries, 2007 Edition Nisei Memories is an extraordinarily moving account of two second-generation Japanese Americans who were demonized as threats to national security during World War II. Based on Paul Takemoto's interviews with his parents, in which they finally divulge their past, Nisei Memories follows their lives before, during, and after the war -- his father serving his country, his mother imprisoned by it. At the start of the war, twenty-one-year-old Kaname (Ken) Takemoto was a sophomore at the University of Hawaii. Although classified as an ?enemy alien,? he served in the army, first as a Varsity Victory Volunteer and then as a combat medic with the 100th Battalion /442nd Regimental Combat Team in Italy. Fifteen-year-old Alice Setsuko Imamoto was attending high school in California when the war began. Soon after, her father and mother were both imprisoned. She and her three sisters were sent to an assembly center in Santa Anita, and eventually the family was reunited at a relocation camp in Jerome, Arkansas. She was finally released to attend Oberlin College on a music scholarship. Like so many others, Ken and Alice had never spoken of their experiences, which, as their son explains, ?loomed as backdrops to our lives, but until now were never discussed.' While his father had relived his wartime experiences over and over in his mind, his mother blocked many of hers from memory. Takemoto fills in some of the gaps with information gleaned from correspondence and documents. Of unusual power and appeal, the interviews lead readers through the half century of uncertainty and trauma endured by the family before it was able to confront issues central to its existence. They tell a story of perseverance and forgiveness and, ultimately, pride.… (more)