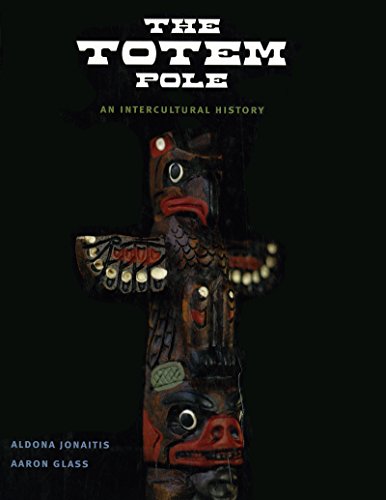 The totem pole : an intercultural history

The Northwest Coast totem pole captivates the imagination. From the first descriptions of these tall carved monuments, totem poles have become central icons of the Northwest Coast region and symbols of its Native inhabitants. Although many of those who gaze at these carvings assume that they are ancient artifacts, the so-called totem pole is a relatively recent artistic development, one that has become immensely important to Northwest Coast people and has simultaneously gained a common place in popular culture from fashion to the funny pages. The Totem Pole reconstructs the intercultural history of the art form in its myriad manifestations from the eighteenth century to the present. Aldona Jonaitis and Aaron Glass analyze the totem pole's continual transformation since Europeans first arrived on the scene, investigate its various functions in different contexts, and address the significant influence of colonialism on the proliferation and distribution of carved poles. The authors also describe their theories on the development of the art form: its spread from the Northwest Coast to world's fairs and global theme parks; its integration with the history of tourism and its transformation into a signifier of place; the role of governments, museums, and anthropologists in collecting and restoring poles; and the part that these carvings have continuously played in Native struggles for control of their cultures and their lands. Short essays by scholars and artists, including Robert Davidson, Bill Holm, Richard Hunt, Nathan Jackson, Vickie Jensen, Andrea Laforet, Susan Point, Charlotte Townsend-Gault, Lyle Wilson, and Robin Wright, provide specific case studies of many of the topics discussed, directly illustrating the various relationships that people have with the totem pole. Errata: http://www.washington.edu/uwpress/books/Jonaitis_errata_24.pdf… (more)