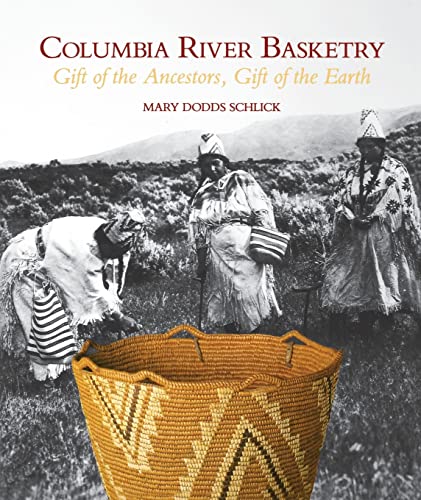 Baskets made by the people of the mid-Columbia River are among the finest examples of Indian textile art in North America, and they are included in the collections of most major museums. The traditional designs and techniques of construction reveal a great artistic heritage that links modern basketmakers to their ancestors. Yet baskets are also everyday objects of a utilitarian nature that reveal much about mid-Columbia culture---a flat twined bag has greatest value when it is plump with dried roots, a coiled basket when full of huckleberries. In Columbia River Basketry, Mary Schlick writes about the weavers who at the time of European contact lived along the Columbia River from just above its confluence with the Yakima River westward to the vicinity of present-day Portland, Oregon, and Indian groups living along the river. She presents the baskets in the context of the lives of the people who created and used them. She also writes about the descendants of the early basket weavers, to whom basketry skills have been passed and from whom she herself learned to make baskets. Schlick blends mythology, personal reminiscences, materials, and basketry techniques. Written with deep understanding and appreciation of the artists and their work, Columbia River Basketry will be an inspirational sourcebook for basket weavers and other craftspeople. It will also serve as an invaluable reference for scholars, curators, and collectors in identifying, dating, and interpreting examples of Columbia River basketry.… (more)

Cedar : tree of life to the Northwest Coast Indians by Hilary Stewart
Indian Basket Weaving : How to Weave Pomo, Yurok, Pima, and Navajo Baskets by Sandra Corrie Newman
Indian Baskets of the Pacific Northwest and Alaska by Allan Lobb
The Fine Art of California Indian basketry by Brian Bibby
Looking at Indian art of the Northwest Coast by Hilary Stewart
2 more
That balance so rare : the story of Oregon by Terence O'Donnell
I will tell of my war story : a pictorial account of the Nez Perce War by Scott M. Thompson
Fewer