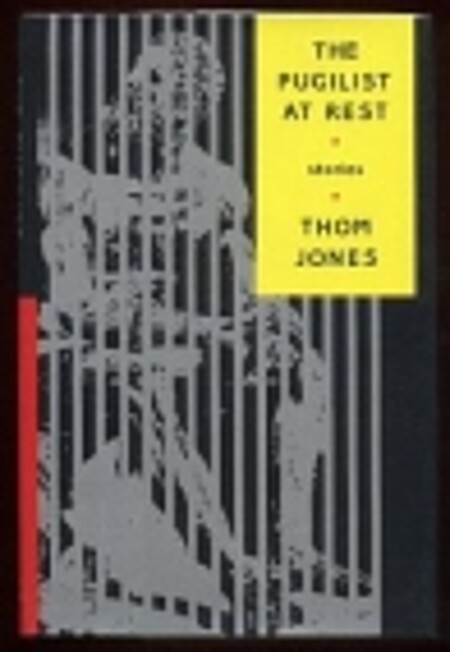 The pugilist at rest : stories

Thom Jones made his literary debut in The New Yorker in 1991. Within six months his stories appeared in Harper's, Esquire, Mirabella, Story, Buzz, and in The New Yorker twice more. "The Pugilist at Rest" - the title story from this stunning collection - took first place in Prize Stories 1993: The O. Henry Awards and was selected for inclusion in Best American Short Stories 1992. He is a writer of astonishing talent. Jones's stories - whether set in the combat zones of Vietnam or the brittle social and intellectual milieu of an elite New England college, whether recounting the poignant last battles of an alcoholic ex-fighter or the hallucinatory visions of an American wandering lost in Bombay in the aftermath of an epileptic fugue - are fueled by an almost brutal vision of the human condition, in a world without mercy or redemption. Physically battered, soul-sick, and morally exhausted, Jones's characters are yet unable to concede defeat: his stories are infused with the improbable grace of the spirit that ought to collapse, but cannot. For in these extraordinary pieces of fiction, it is not goodness that finally redeems us, but the heart's illogical resilience, and the ennobling tenacity with which we cling to each other and to our lives. The publication of The Pugilist at Rest is a major literary event, heralding the arrival of an electrifying new voice in American fiction, and a writer of magnificent depth and range. With these eleven stories, Thom Jones takes his place among the ranks of this country's most important authors.… (more)

LibraryThing member Sean191
I don't get it. Either I don't get the final story in this collection or I don't get why Thom Jones or his editor would place this as the final piece. To me, it was the weakest story by far. Enough so that it made a book I overall enjoyed a little less of a good experience. The first few stories were reminiscent of Tim O'Brien, but O'Brien seemed a bit closer to reality. Maybe because O'Brien's was actually in combat. But the stories that stuck closer to Jones' real-life experiences, such as his training in the marines, his father's history as a boxer (not sure if Jones was a boxer as well?) were vividly told and captivating and worth the read.… (more)
4 more
LibraryThing member johnluiz
A contemporary classic. Thom Jones has won wide recognition. The title story is particularly famous, and "I Want to Live" was selected by John Updike as one of the best short stories of the 20th century. The praise is all well-deserved. There's an amazing range of talent at work here. Apparently, Jones was a Marine during the war, but never left the states. It's hard to believe that he didn't have firsthand experience to fuel the details that fill the stories in Part I of the collection. They are some of the most vivid and harrowing insight into the horrors and brutality of war you could ever read.

After those "blow your socks off" pieces, the setting and location of the stories shift dramatically, as we're introduced to a series of unsympathetic characters -- the cads in "Wipeout" and "Mosquitoes" - who are unflinchingly portrayed in their extreme and unvarnished narcissism. Only a writer in full command of his prodigious talents could pull off those kinds of characters so successfully.

In the same fashion as John Irving with his bears and wrestling, there are certain recurring elements in many of Jones' stories. Here it's Vietnam service, epilepsy, boxing, and absent fathers who spent time in mental institutions. Just when you think Jones could out macho any other writer around, he surprises you with the poignancy and power of "I Want to Live" where he writes from the perspective of an older woman dying of cancer. The 11 stories in the collection are:

Part I (The Vietnam Stories)
1. The Pugilist at Rest - 25 pp - The renowned, often anthologized title story deserves every bit of the acclaim it has garnered over the years. When you finish it, you can't help but say to yourself, "Holy sh*@t, that was awesome!" The story of a tough-guy solider in Vietnam, with a brutally detailed account of one of the firefights he gets caught in. With a gun jammed with sand from an explosion, he can only helplessly watch as several friends get blown to pieces. After the war, searching for the same adrenaline rush, he becomes a boxer. One fight with an accomplished boxer, which he ironically wins, leaves him with a severe case of epilepsy. His contemplations on his plight lead to him to thoughts of Theogenes, the great ancient gladiator, whom he thinks is the model for the statue The Pugilist at Rest, and also to the writings and the rather bleak world view of the philosopher Schopenhauer. With few options for the narrator to try to right his health, the choice he has to consider at the end is devastating.

2. Break on Through - 37 pp - Another story with intense and vividly described battle scenes. It also portrays the intense, but edgy, camaraderie among the soldiers and how they deal with Baggit, a crazy and explosively violent, fellow grunt, whom the narrator can't help but feel loyal to because Baggit saved his life.

3. The Black Lights - 21 pp - Kind of a veterans' Cuckoo's Nest as the narrator describes his days in a Marine psychiatric hospital under the treatment of a psychiatrist with a tin nose because his real one was bitten off by a crazed patient. Having had his bell rung in a boxing match (the knockout made him see "the black lights"), the narrator is at the hospital because of his severe epileptic fits. The story describes some of the crazed fellow patients he meets until he is discharged, which becomes an adventure unto itself.

Part II
4. Wipeout -- 10pp -- The first of several unappealing protagonists. Here a ladies' man brags about how successfully he plays women, but then he meets a real challenge - a woman he could fall in love with. Now he has to consider whether he's capable of changing.

5. Mosquitoes - 14 pp - Another cad. This one is an LA ER doctor who visits his professor brother in Middlebury, Vermont, during a mosquito infestation. The doctor becomes his own infestation - constantly taunting his older brother for being controlled by his unpleasant wife. His attempt to take charge of the situation, by doing his brother "a favor," naturally only makes things worse.

6. Unchain My Heart - 18 pp - One of the 2 stories in the collection told from a woman's perspective - here, a reader of fiction submissions for a magazine who's in love with a super macho deep-sea diver. Her friends warn her about her obsession, and even she knows the diver's cheating on her, but his super-virile masculinity and his dangerous profession make him so appealing to her other men pale in comparison. Revealing any more would give away the ending, but the story offers fun insights into the enduring hold bad boys have on some women.

Part III
7. As of July 6th, I Am Responsible for No Debts Other Than My Own -- 11 pp - We get to see the LA ER doctor from "Mosquitoes" as a boy, suffering at the hands of the abusive guy who moved in with his mother after his father, a former heavyweight boxer, skipped out on them. Eventually, though, the boy grows up, gets his revenge and becomes friends with the man.

8. Silhouettes - 24 pp - A high school special ed. student gets life lessons from the team of high school janitors he works with. They're not very successful in warning him to stay away from his girlfriend and then wife -- a loose Native American girl who cheats on him and sues him for child support for a kid that may not even be his. Even with their advice falling on advice, the kid gradually becomes a full-fledged and accepted member of the custodial crew - and surprisingly, it's an interesting transformation to watch. The janitors are a fun bunch of quirky characters -- including one who is a Ph.D. candidate in philosophy and has more education than any of the teachers on the staff.

9. I Want to Live! - 25 pp - An incredibly powerful, mostly stream-of-consciousness tale of the last days of a woman with cancer. Describes in frightening details all the pains and ignominy terminal cancer patients face. A widow with a grown daughter, this woman forms an unexpected bond with her son-in-law, who turns her onto the works of Schopenhauer, a philosopher whose bleak, but resigned worldview completely fits her current mood about all the hardships life has to offer. In her dying moments, her fondest memories are of the swaggering, highly territorial, and sex-charged rooster at the farm she grew up on during the Depression.

Part IV
10. A White Horse - 18 pp - An advertising copywriter in an epileptic fugue finds himself in Bombay, where he becomes obsessed with saving a near-dead horse he sees on the beach. He hires a local doctor to cure the horse and offers him a monthly stipend if he'll continue to take care of it.

11. Rocket Man - 20 pp - A startling profile of two boxers - one at the height of his powers, ready to take on a Scottish champ, the other a former champ and now alcoholic who works as the younger fighter's trainer and corner man. The old man pumps up his young charge with quotes from Nietzsche, but there's a sadness and emptiness to their conversation as they spur each other on. The old man tells him to hang on to his title once he wins it because "There's nothing more useless to the world than a washed-up prizefighter." As the younger fighter visits his trainer at a detox hospital (the trainer's third stay in a year), he seems oblivious to the fact that he's staring into his future.
… (more)
LibraryThing member dkbunnell
I love Thom Jones' writing: infused with power and so dark, raw, and real. His collection of short stories gives a sense of urgency that life must be lived fully, no effing around.
LibraryThing member b.masonjudy
Thom Jones writes about war and boxing very well but he stumbles when the subject matter shifts. "The Pugilist at Rest" is an incredible story and the whole of Part I in this collection blew me away with its deft incorporation of philosophy which totally subverts the expectations of the reader that it will be a straightforward war narrative. The rest of the collection, especially Part II, really took a dive when trying to write about American culture, the character's felt flat and a lot of the motivations were so routinely explicated it got wearisome. I found few other stories that I really resonated in the same way as TPAR, the one exception being the final story "Rocket Man," with some moving monologues between a former lightweight champion and his boxing protege.… (more)
LibraryThing member ThomasPluck
I'd read the amazing title story before, but the rest are equally gripping, potent, and visceral.
Fewer