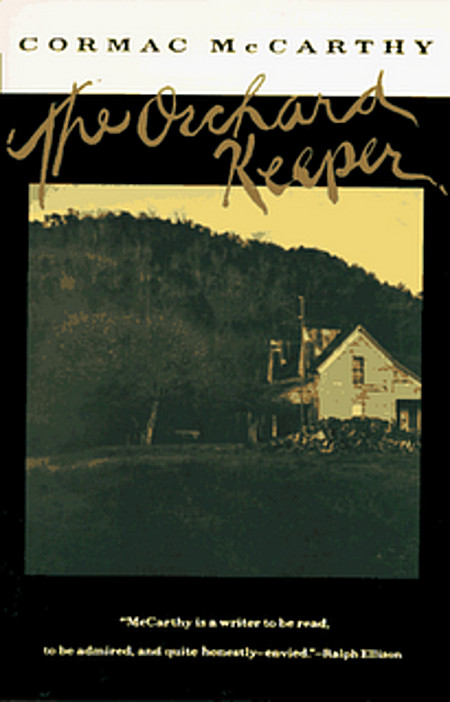 In a small, remote community in rural Tennessee in the years between the two world wars, John Wesley Rattner, a young boy, and Marion Sylder, an outlaw and bootlegger who, unbeknownst to either of them, has killed the boy's father enact a drama that seems born of the land itself.

New York Times
Mr. McCarthy is expert in generating an emotional climate, in suggesting instead of in stating, in creating a long succession of brief, dramatic scenes described with flashing visual impact. He may neglect the motivation of some of his characters. He may leave some doubt as to what is going on now. But he does write with torrential power.

LibraryThing member Hagelstein
Before Cormac McCarthy wrote about the American West, he wrote about rural Tennessee. The Orchard Keeper, originally published in 1965, was his first novel. In it, McCarthy originates his style of intertwining nature and the land with violence done by man.

Fellow Tennessean William Gay, among others, obviously drew inspiration from McCarthy, without adopting the sometimes wordily dense writing style favored by McCarthy in his early novels.

The story revolves around bootleggers in the 1930s and 40s and it meanders beautifully, as does nature, between scenes of the land and rural life, interspersed with the violence surrounding bootlegging and general larceny. His characters veer between well-drawn and commonplace, but move the story along and contribute to the narrative.… (more)
8 more
LibraryThing member eclbates
This book could have used quotation marks, women who are relevant instead of simply present in the same way that furniture is, and a great deal less thesaurus.
LibraryThing member fuzzy_patters
McCarthy's writing is like going through a dream where everything is shrouded in a dense fog that slowly lifts to unvail each scene. He is a brilliant writer, and this is evident even from his first novel, The Orchard Keeper, about a young boy and his friendship with a man who runs whiskey in the 1930s. The influence of Faulkner is obvious, yet McCarthy's tale is both true and original.… (more)
LibraryThing member Wubsy
Having read The Road and Sutree before this, McCarthy's debut novel, I certainly saw motifs and descriptions that re-emerged in those later books. McCarthy is brilliant in rendering landscape, and although I find his characters difficult to grasp it doesn't really matter to me when the writing is this tight and the authors use of a word or phrase transforms the mundane or vicious so superbly. I highly recommend it.… (more)
LibraryThing member jpporter
I am a fan of Cormac McCarthy. His writing style is unlike that of most American authors: minimalist, articulate, clear and - at times - brutal. He has an incredible knack for putting the reader in the story, in the very places he describes.

The Orchard Keeper is maybe one of the lesser stories I have read by him. It focuses on the lives of three people representing three generations, their lives connected, although not necessarily of the same family. The story takes place in Tennessee, around 1950.

The characters are John Wesley Rattner, a young teenager living with his mother; Marion Sylder, a bootlegger who (it turns out) has killed Rattner's father - in self defense - although Rattner does not know this; and elderly Ather Ownby, Rattner's uncle, who lives alone with his old dog in a run-down cabin in what used to be an orchard. The interaction between the characters seems incidental to the story, and what becomes of each character is not in any obvious way connected to the other characters.

The story is disjointed, and probably intentionally so. McCarthy's sparse construction style leaves it up to the reader to determine what is going on, with the author providing only significant events as road signs on the twisting narrative. My take is that he has attempted to capture a pivotal period: the post-World-War-II era.

Ownby represents the past - defined by self-sufficiency and independence; an acceptance of the world as it is, and a willingness to function therein. Rattner represents the future - increasingly untethered to the past, seeking a way to pass from what was left of the pre-War world to the demands of the future. This makes Sylder something of a linchpin to the story, a man trying to bridge the past with the future; in the end, his attempts to adapt to the exigencies of the future are ensnared by the remnants of the past.

At least, that's my take on it. This book is redolent of the typical McCarthy writing style - scenes articulated in sparse but driving language that dares the reader to flow with the prose, and rewards the reader willing to do so with an unequaled experience.… (more)
LibraryThing member beebowallace
Cormac McCarthy just doesn't let you down. This is not as brutal, as depressing or as violent of some of his other work. However it is a really well told, beautifully told story. I think it just might be my favorite work of his now ...
LibraryThing member DanielSTJ
This was McCarthy's first novel. Although the prose was interesting, I didn't feel that the story had any overarching and lasting quality to it. The action scenes, especially the shootout, were very interesting-- but that is about it. Nevertheless, a good primer for McCarthy and his style.
LibraryThing member gregorybrown
McCarthy's first published book, but his tendencies are already crystal clear: favoring descriptions of external action over internal psychology, using sharp words to describe nature and blighted landscapes, chronicling the collision of two ways of life. Some of these draw inspiration from earlier work—at the time of publication, this first book was derided as a Faulkner-knockoff—but the sum is totally his.

It's not an easy book to read by any means, as I had to ask my wife several times what was happening or re-read sections to wrap my mind around it. And the plot certainly meanders, not coming to as sharp a point as his later works. It's a worthwhile read, but if you're wondering which McCarthy to start out on, this ain't it.… (more)
LibraryThing member yvonne.sevignykaiser
Read for Southern Literary Trail Book Group this was the Moderator Choice for January 2016.
Fewer