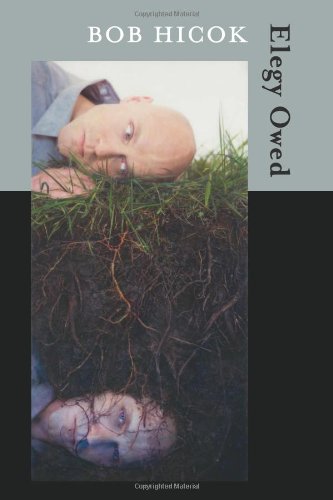 National Book Critics Circle Award finalist "[Elegy Owed is a] fluid, absorbing new collection... Hicok gives readers unexpected conjunctions and oddly offbeat thoughts, most darkly whimsical, and has us embrace them wholeheartedly. If he can survive the scary carnival that is this world, we can, too. Highly recommended for a wide range of readers."--Library Journal,starred review "Bob Hicok is one of my favorite poets. Partly, it's the movement of his lines, which are both conversational and utterly unexpected, almost as if he (or we) are joining a conversation that extends beyond the framework of the poem...And then there's his unrelenting vision, a sense of the world as both utterly real and utterly elusive, and heartbreaking because we have to die. Death is at the center of Hicok's writing--not in a maudlin, self-pitying way, but rather as a vivid presence, infusing everything, even the deepest moments of connection, with a steely sense of loss."--David Ulin, reviewingElegy Owed in theLos Angeles Times "This gorgeous collection [Elegy Owed] spans the landscape of loss with unexpected leaps and ripples, as if someone has skipped stones across a lake. ...Wordplay, subtle humor and unexpected moments of hope give these lush poems depth and dimension. Hicok's work is memorable because of the new vistas it creates." --The Washington Post "Words have weight in Hicok's poems. They feel nailed in place, and the meter hits like the sure pounding of a hammer. Yet as heft, muscle, and precision draw you forward, Hicok evokes not solidity but, rather, shifting ground, flux, metamorphosis, and, most arrestingly, most unnervingly, death. In his seventh collection, Hicok builds startling images out of the everyday and the surreal, the comic and the sorrowful. Avoiding abstraction and pretension, he cleaves to earth, skin, breath." -Donna Seaman,Booklist "Hicok's poems [inElegy Owed] are like boomerangs; they jut out in wild, associative directions, yet find their way back to the root of the matter." --Publishers Weekly "Seamlessly, miraculously, [Hicok's] judicious eye imbues even the dreadful with beauty and meaning."--The New York Times Book Review When asked in an interview "What would Bob Hicok launch from a giant sling shot?" he answered, "Bob Hicok."Elegy Owed,Hicok's eighth book, is an existential game of Twister in which the rules of mourning are broken and salvaged, and "you can never step into the same not going home again twice." His poems are the messenger at the door, the unwanted telegram--telling a joke, imparting a depth of longing, returning us finally to a different kind of normality where "the dead have no ears, no answering machines / that we know of, still we call." There is grief in these poems, though it is a grief large enough for odd awakenings and the unexpected, a grief enlarged by music, color, and joy as well as sober wisdom. "Hicok is funny as hell, in Blake's sense of the infernal: irreverent, anarchic, undeceived. His bracing ill humor is a vehicle for outrage, longing, tenderness, and a shy cynicism that is the necessary counterbalance to a tenacious sense of hope. He is one of our premier anatomists of contemporary American life, and a wildly refreshing, necessary poet." --Mark Doty Bob Hicok is one of the most active poets writing today, and his poems have appeared widely, including inThe New YorkerandPoetry. His honors include the Bobbitt Prize from the Library of Congress and a "Notable Book of the Year" fromBooklist. Hicok has worked as an automotive die designer and a computer system administrator, and is currently an associate professor of English at Virginia Tech. He lives in Blacksburg, Virginia.… (more)

Bender : new & selected poems by Dean Young
Letters to Borges by Stephen Kuusisto
Space, in chains by Laura Kasischke
Flies by Michael Dickman
Darkness Sticks to Everything Collected and New Poems by Tom Hennen
16 more
Fall higher by Dean Young
Alight by Fady Joudah
One with others : [a little book of her days] by C. D. Wright
Break the glass by Jean Valentine
Thunderbird by Jane Miller
Last poems by Hayden Carruth
The Infinitesimals by Laura Kasischke
Greenhouses, Lighthouses (Lannan Literary Selections) by Tung-Hui Hu
Sailing through Cassiopeia by Dan Gerber
Flood song by Sherwin Bitsui
The new testament by Jericho Brown
Duppy Conqueror: New and Selected Poems by Kwame Dawes
News of the World: poems by Philip Levine
The end of the west by Michael Dickman
Everything Begins Elsewhere by Tishani Doshi
Come on all you ghosts by Matthew Zapruder
Fewer