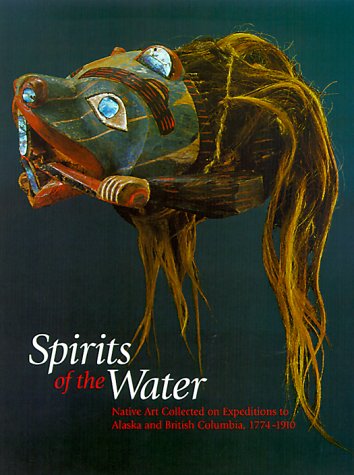 Spirits of the water : Native art collected on expeditions to Alaska and British Columbia, 1774-1910

The images in the pages of this book-animal, human, and spirit faces-evoke the powerful cultural legacy of the inhabitants of the Northwest Coast. Spirits of the Water presents approximately 175 examples of the art produced by the Native peoples of a region of great linguistic, cultural, and geographical diversity. Accompanying essays establish a historical and cultural context for this remarkable assemblage of objects, and explore the traditions of art, social organization, and ceremony that inspired their makers. Early expeditions of exploration and trade to the northern Pacific coast were responsible for the acquisition of numerous objects, such as masks, tools, clothing, and baskets. Spirits of the Water examines the history of Russian, Spanish, English, and American expeditions in relation to the discovery and collection of these artifacts, many now considered to be extraordinary works of art. Gathered from international museums and private collections, these objects are among the oldest known works of Northwest Coast Indian art. This book also brings together many of the drawings and engravings made by the Spanish, English, and Russian artists who witnessed and recorded the first encounters with the lands of the Northwest Coast and their inhabitants. These works of functional art, with their expressive abstractions of animals and supernatural beings, reveal the religious and social motivations intertwined in their powerful aesthetic presence. Masks in particular express the imagination and creativity of the maker while conveying social hierarchies and spiritual motivations. The contributors to this volume invoke the pragmatic and ceremonial worlds in which these artifacts were used and examine how the material cultures of the Northwest Coast were understood by explorers and collectors as diverse as Captain James Cook and Max Ernst.… (more)