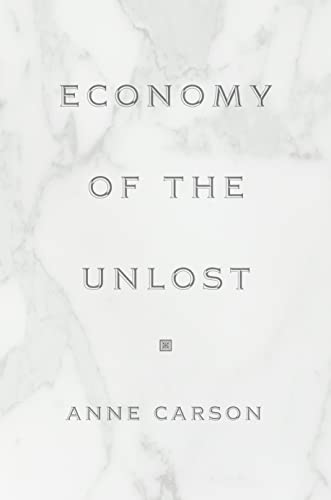 Economy of the unlost : reading Simonides of Keos with Paul Celan

The ancient Greek lyric poet Simonides of Keos was the first poet in the Western tradition to take money for poetic composition. From this starting point, Anne Carson launches an exploration, poetic in its own right, of the idea of poetic economy. She offers a reading of certain of Simonides' texts and aligns these with writings of the modern Romanian poet Paul Celan, a Jew and survivor of the Holocaust, whose ""economies"" of language are notorious. Asking such questions as, What is lost when words are wasted? and Who profits when words are saved? Carson reveals the two poets' striking com

LibraryThing member deliriumslibrarian
One of three works of theory that has made me cry (in a spontaneous emotive way, not in a this is so hard way). A negotiation with disappearance, with totalitarianism, with memory that is unparalleled. Not just for Carson completists.