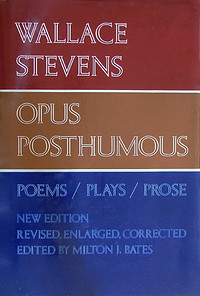 When Opus Posthumous first appeared in 1957, it was an appropriate capstone to the career of one of the most important writers of the twentieth century. It included many poems missing from Stevens's Collected Poems, along with Stevens's characteristically inventive prose and pieces for the theater. Now Milton J. Bates, the author of the acclaimed Wallace Stevens: A Mythology of Self, has edited and revised Opus Posthumous to correct the previous edition's errors and to incorporate material that has come to light since original publication. A third of the poems and essays in this edition are new to the volume. The resulting book is an invaluable literary document whose language and insights are fresh, startling, and eloquent.

LibraryThing member Cheryl_in_CC_NV
I lightly skimmed the plays, did not read the prose, and just read the poems without trying to make sense of them. ?ßStevens' work is way out of my league. ?├ā┬ĪOr he's a humbug on acid, but since other ppl admire him so much I'm guessing it's just me. ?├ā┬ĪHe does seem racist, throwing around
Show More
words like Dago and stereotypes about Negroes. ?├ā┬ĪBut then, I could be totally misunderstanding. ?├ā┬ĪWhat I get out of Stevens' poetry is music & bright imagery. ?├ā┬ĪI need to find an audiobook collection of his work, read by someone who has more of a clue than I, of course.

Solitaire Under the Oaks

In the oblivion of cards
One exists among pure principles.

Neither the cards nor the trees nor the air
Persist as facts. ?├ā┬ĪThis is an escape

To principium, to meditation.
One knows at last what to think about

And thinks about it without consciousness,
Under the oak trees, completely released.

(This is exactly how I feel when playing a Match 3 or Hidden Object game!)

The mulberry is a double tree.
Mulberry, shade me, shade me awhile.

A churchyard kind of bush as well,
A silent sort of bush, as well,
Mulberry, shade me, shade me awhile.

It is a shape of life described
By another shape without a word.
Mulberry, shade me, shade me awhile--

With nothing fixed by a single word.
Mulberry, shade me, shade me awhile.

Say this to Pravda, tell the damned rag
That the peaches are slowly ripening.
...

Say that in the clear Atlantic night
The plums are blue on the trees. ?├ā┬ĪThe katy-dids
Bang cymbals as they used to do.
Millions hold millions in their arms.