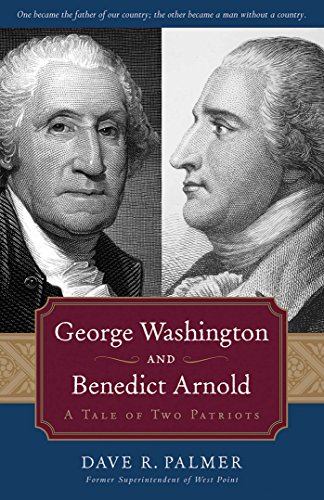 George Washington and Benedict Arnold : a tale of two patriots

Fateful turns, choices and escapes from certain death dominate this captivating story of the most compelling figures of the Revolutionary War. When General George Washington appointed Benedict Arnold military commander of the Philadelphia region, military historian Palmer argues, he was not only making one of the worst personnel decisions of his career, but was also creating the conditions for the "Traitor of America" to commit his crime. Stark contrasts and similarities between two men show how their choices informed their destiny. The son of an alcoholic, Arnold became a wealthy merchant before he took up arms against the British, but distinguishing himself on the battlefield was not enough to earn Arnold the prestige he perpetually sought. Washington, who grew up on a tranquil farm, was the beneficiary of guidance from influential figures and was groomed to be a leader. Palmer has a talent for building momentum and suspense, but his most skilled turn is as profiler of the military comrades who would later be foes.… (more)

LibraryThing member CritEER
- Biography of two men with great talents and both had the potential for greatness..the difference in the two was character
- G.W. character shaped his greatness and B.A. lack of character resulted in him being labeled as the #1 traitor in US history
- Each individual would react differently when faced with adversity and public insults
- Color photos make this a very attractive book… (more)
1 more
LibraryThing member torrey23
This book is excellent. There was not much new about Washington, but the book takes a side-by-side comparison of Washington and Arnold. This brought clarity to some of the actions of the characters. I was concerned that the author would minimize Arnold's treason or his importance to the revolution. Contrary to my fears, this book showed how important Arnold was to America's independence, and how treacherous he was. I would highly recommend this book.… (more)
Fewer