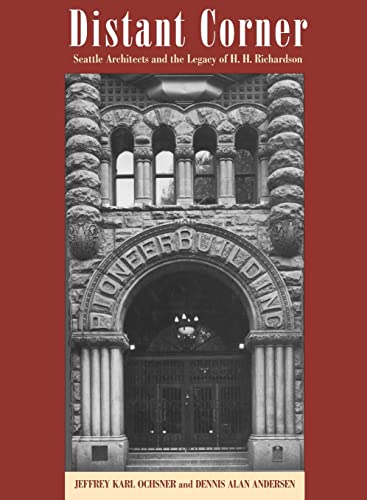 Distant corner : Seattle architects and the legacy of H.H. Richardson

On the afternoon of 6 June 1889, a fire in a cabinet shop in downtown Seattle spread to destroy more than thirty downtown blocks covering 116 acres. Disaster soon became opportunity as Seattle's citizens turned their full energies to rebuilding: widening and regrading streets, laying new water pipes and sewer lines, promulgating a new building ordinance requiring construction in the commercial core, and creating a new professional fire department. A remarkable number of buildings, most located in Seattle's present-day Pioneer Square Historic District, were permitted within a few months and constructed within a few years of the Great Seattle Fire. As a result, the post-fire rebuilding of Seattle offers an extraordinarily focused case study of late-nineteenth-century American urban architecture. Seattle's architects, seeking design solutions that would meet the new requirements, most often found them in the Romanesque Revival mode of the country's most famous architect, Henry Hobson Richardson. In October 1889, Elmer Fisher, Seattle's most prolific post-fire architect, specifically cited the example of H. H. Richardson in describing the city's new buildings. In contrast to Victorian Gothic, Second Empire, and other mid-nineteenth-century architectural styles, Richardson's Romanesque Revival vocabulary of relatively unadorned stone and brick with round-arched openings conveyed strength and stability without elaborate decorative treatment. For Seattle's fire-conscious architects it offered a clear architectural system that could be applied to a variety of building types - including office blocks, warehouses, and hotels - and ensure a safer, progressive, and more visually coherent metropolitan center. Distant Corner examines the brief but powerful influence of H. H. Richardson on the building of America's cities, and his specific influence on the architects charged with rebuilding the post-fire city of Seattle. Chapters on the pre-fire city and its architecture, the technologies and tools available to designers and builders, and the rise of Richardson and his role in defining a new American architecture provide a context for examining the work of the city's architects. Seattle's leading pre- and post-fire architects - William Boone, Elmer Fisher, John Parkinson, Charles Saunders and Edwin Houghton, Willis Ritchie, Emil DeNeuf, Warren Skillings, and Arthur Chamberlin - are profiled. Distant Corner describes the new post-fire commercial core and the emerging network of schools, firehouses, and other public institutions that helped define Seattle's neighborhoods. It closes with the sudden collapse of Seattle's economy in the Panic of 1893 and the ensuing depression that halted the city's building boom, saw the closing of a number of architects' offices, and forever ended the dominance of Romanesque Revival in American architecture. With more than 200 illustrations, detailed endnotes, and an appendix listing the major works of the city's leading architects, Distant Corner offers an analysis of both local and national influences that shaped the architecture of the city in the 1880s and 1890s. It has much to offer those interested in Seattle's early history, the building of the city, and the preservation of its architecture. Because this period of American architecture has received only limited study, it is also of importance for those interested in the influence of Boston-based H. H. Richardson and his contemporaries on American architecture at the end of the nineteenth century.… (more)