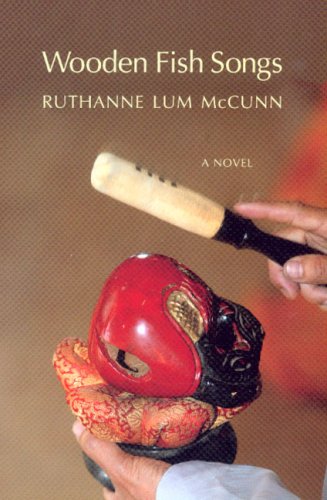 "In nineteenth-century China, "Wooden Fish Songs" were the laments sung by Chinese women for their men who went looking for a better life on "Gold Mountain" - America. In the novel Wooden Fish Songs, the voices of three extraordinary women speak across the decades to tell the story of one such real-life pioneer - Lue Gim Gong ("Double Brilliance")." "After years of virtual indentured servitude in the West and New England, Lue put his genius for plants to work in Florida, creating the orange hybrids that earned him international renown as a "plant wizard." Lue's story is told by the three women who knew him best and begins with Sum Jui, his mother, who describes her attempts to shield her beloved son from bitter family rivalries. Interwoven with Sum Jui's account is that of Fanny Burlingame, the repressed but spirited daughter of a tyrannical New England merchant, who seeks solace both in the Bible and in laudanum. She becomes Lue's mentor and friend when the gifted and indomitable young man is brought to a Massachusetts town as an unwitting strikebreaker and stays to pursue his destiny." "Finally, Sheba, daughter of a slave, recounts her experiences working alongside Lue in the rugged Florida frontier of the 1870s. Her life and her husband's become intertwined with that of the Chinese man, who with his white benefactress dares defy racial prejudice and social convention to create an agricultural revolution with lessons learned in his native land. It is a triumph of cross-fertilization that stands as the novel's central metaphor for the strength that multiplicity and diversity can breed when fostered and not feared."--BOOK JACKET.Title Summary field provided by Blackwell North America, Inc. All Rights Reserved… (more)