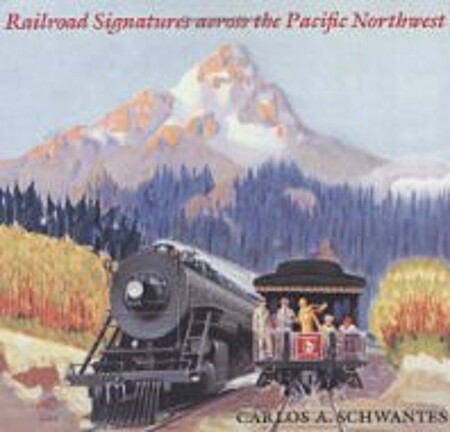 Railroad signatures across the Pacific Northwest

by Carlos A. Schwantes

Remembering the trains that ran by his boyhood home, Carlos Schwantes says, "Never once did it occur to me to ponder whether we lived on the right or wrong side of the tracks. I only felt fortunate to have a front-row seat." Out of his lifelong fascination, blended with a historian's insight, he has fashioned a pathbreaking photohistory that shows the impact of the railroads on everyday life in Oregon, Washington, Idaho, and Montana. The desert expanses were so great and the forests so dense in the Pacific Northwest that until the railroads scrawled their signatures across the land, it was doomed to remain an array of scattered, isolated settlements. But with the arrival of the twin ribbons of steel came enormous and lasting social and economic changes. Farmers in the Palouse had access to eastern markets for their grain; larger quantities of logs and ore arrived at distant mills and smelters; Willamette Valley fruit growers and orchardists found new consumers; Mount Rainier, Glacier National Park, Crater Lake, and Idaho's scenic spots became destinations for eager tourists; cities had links to the East. Railroad Signatures across the Pacific Northwest describes how the railroads fostered settlement, promoted tourism and economic growth, and helped to create the region's character. Carlos Schwantes chronicles the complex and sometimes stormy history of the major railroads--the Northern Pacific, the Great Northern, the Union Pacific, and the Milwaukee--and also shows the role of smaller railroads such as the Sumpter Valley and the Idaho and Washington Northern. He includes portraits of the railroad titans--Henry Villard, James J. Hill, and E. H. Harriman--whose egos, ambitions, and competitiveness shaped the railroads that in turn shaped the region. The engaging and authoritative text and illustrations bring to life the experiences of both railroad passengers and workers. The book includes more than 200 photographs, most previously unpublished, that document the trains, towns, people, and landscape of the Northwest. The exuberant posters and brochures that the railroads published in order to lure settlers and tourists to the region are reproduced in color.… (more)