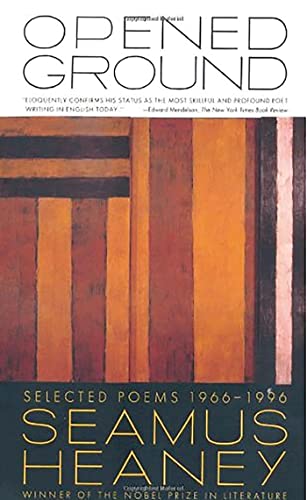 This volume is a much-needed new selection of Seamus Heaney's work, taking account of recent volumes and of the author's work as a translator, and offering a more generous choice from previous volumes. Opened Ground: Poems 1966-1996 comes as close to being a 'Collected Poems' as its author cares to make it. It replaces his New Selected Poems 1966-1987, giving a fuller selection from each of the volumes represented there and adding large parts of those that have appeared since, together with examples of his work as a translator from the Greek, Latin, Italian and other languages. The book concludes with 'Crediting Poetry', the speech with which Seamus Heaney accepted the 1995 Nobel Prize in Literature, awarded to him, in the words of the Swedish Academy of Letters, for his 'works of lyrical beauty and ethical depth'.… (more)

LibraryThing member palaverofbirds
Seamus Heaney is certainly a great Irish poet and a great naturalist poet. I think he goes even beyond just those limits. His poetry, in my mind, embodies everything that makes the English language and English poetry so wonderful and unique. I really hope that when 20th century poetry is taught in 21st century schools that no curriculum skips past Heaney.… (more)
2 more
LibraryThing member Joles
Seamus Heaney is a master at his craft. His poems are evocative and ensnaring. They deal with the culture of Ireland in actions and landmarks. His works are emotional and stirring.
LibraryThing member a211423
His poetry is at once mysteriously haunting one minute and in the next a revelation.
Fewer