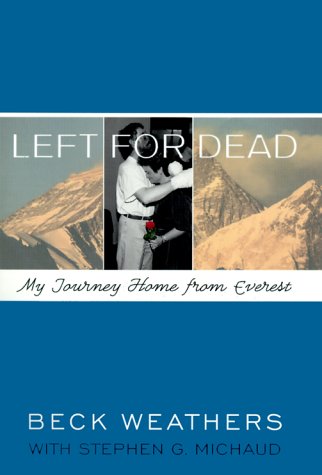 Left for dead : my journey home from Everest

Anyone who has read Jon Krakauer's famous account of the 1996 Everest disaster, Into thin air, will remember the story of Beck Weathers: the gregarious Texan climber who went snow-blind in the Death Zone below the summit and who spent a night out in the open during a blizzard that took the lives of a dozen colleagues and friends. Even as he staggered back into Camp 4 the next morning, Beck's condition was such that the other survivors assumed he would not make it back down the mountain. He was effectively left for dead, but drawing upon reserves of determination and courage he didn't know he had - as well as the extraordinary selflessness and bravery of a Nepalese helicopter pilot he'd never met - he finally made it to safety. Only then could a new battle begin: to rebuild his life with a family he'd taken for granted for too long.… (more)

LibraryThing member bookymouse
I had been wanting to read this for awhile. Beck Weathers was left for dead twice during the 1996 Everest season. This is the account of his recovery, as well as what led him to the mountain to begin with. I started it this morning and just finished it. This is a brutally honest look inside a very lucky man. I couldn't put it down.… (more)
6 more
LibraryThing member drebbles
ivided into four parts, "Left for Dead" is not only about Beck Weathers' near death on Mount Everest, but his life before and after the disastrous expedition. The first part of the book describes the events on Mount Everest; the second part is autobiographical; the third part is about his depression and why he took up mountain claiming; and the fourth part is about his life today. Also discussed are his marriage woes and how his marriage survived his various obsessions (such as motorcycle riding and sailing, as well as mountain climbing). The book isn't written solely from Weather's point of view; there are reflections from other people in his life, most notably his wife, Peach.

"Left for Dead" is an interesting read about a flawed human being. Beck Weathers has a good, at times self-deprecating, sense of humor, and is very honest about his flaws. His wife, Peach, is aptly named, but I had to wonder why she stayed married to a man who was absent much of the time and difficult to live with when he was around. There wasn't as much about mountain climbing as I would have liked, but in the end Weathers seemed ill prepared for Everest. Mountain climbing was just an outlet for Weathers' ongoing depression and it's a miracle he wasn't hurt in some of his earlier attempts. While the book goes into much details about Beck's childhood and troubled marriage it glosses over other elements - most noticeably the cost of Beck's climbing expeditions and how Beck was able to take so much time off from work. Finally, I'd like to see an updated postscript on future editions to see how Beck and his family are doing today.

This was an enjoyable read.… (more)
LibraryThing member birksland
One of the most honest books about the sacrifices of climbing and insight into the kinds of people that do it. As a former mountaineer, I appreciated the non-macho slant of this book.
LibraryThing member riverwillow
An interesting and honest exploration of just what drove one man to climb mountains and his recovery following the events on Everest in May 1996 - if you want to learn more about the storm this is not the book for you. One of the things I really like about this book is Weather's refusal to get involved in or take sides in the controversary - 'In that moment, by saving those three people who otherwise surely would have died, Anatoli Boukreev became a hero'… (more)
LibraryThing member Katymelrose
I think Beck's story is intriguing and almost fairy-tale-ish....but not in a bad way. It is because so much of his outlook on life changed based on that one incident, it wasn't a gradual change like life usually is. Because of my expectations, I wasn't sure I was going to be too terribly interested in the parts other than his experience on Everest after reading Into Thin Air by Jon Krakauer and The Climb by Anatoli Boukreev, but I was interested.

Beck tells his story with a self-deprecating sense of humor that makes the story easier to read than it would be without it. He doesn't glorify any of it and includes things that I would imagine would be very difficult to share with the world.

This might finally end my consuming need for more information that Into Thin Air evoked.… (more)
LibraryThing member amerynth
I can't get enough of climbing memoirs, but Beck Weathers' book "Left for Dead" is not really that kind of book. It is, in part at least, the story of his remarkable survival in the deadly 1996 season on Mount Everest, where he was left for dead but survived.

In his opening chapter, he describes himself as an "amateur climber," in my opinion someone who had not business being on Everest, and his book reads that way. It annoyed me the first time he described his crampons (essentially cleats that you attach to your boots to provide traction on ice) as knives. The fact he continued to call them knives rather than crampons thereafter drove me nuts.

I've read several other books on the Everest tragedy (including Krakauer's, Boukreeve's and Breashear's.) I had been avoiding Weathers' book for no particular reason... perhaps it was instinct that I wouldn't like it. Although he had the most dramatic story of all, Weathers' book was the worst of the lot. (Only a small portion of the book is about the expedition itself.) Perhaps my intense dislike for this book is that I expected to be a climber's book and it is more a story about depression. I found it hard to swallow the redemption story and mostly just felt sorry for Weathers' family.… (more)
LibraryThing member MikeAWalters
I enjoyed this book very much. I saw Everest on the big screen and was disappointed at the film's effort at fleshing out the characters a little more. I wanted to know more about Beck Weathers and this book did just that. I would recommend to anyone not only interested in the film, but in survival, the outdoors, climbing, and the dynamics of family relationships and how an individuals desires can affect the entire group.… (more)
Fewer

No Shortcuts to the Top : Climbing the World's 14 Highest Peaks by Ed. Viesturs
High Exposure : An Enduring Passion for Everest and Unforgiving Places by David Breashears
Into thin air : a personal account of the Mount Everest disaster by Jon Krakauer