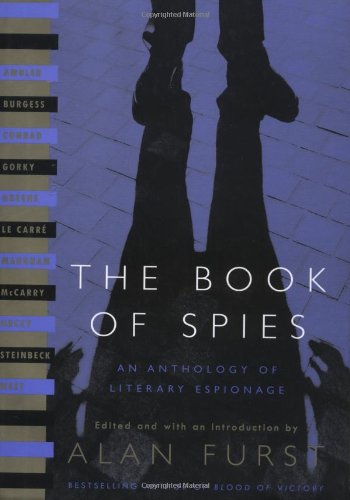 The book of spies : an anthology of literary espionage

These are not just stories of professional intelligence officers. We meet diplomats, political police, agents provocateurs, secret operatives, resistance fighters, and assassins -- players in the Great Game, or victims of the Cold War. The Book of spies brings us the aristocratic intrigues of The scarlet pimpernel, in which French émigrés duel with Robespierre's secret service; the savage political realities of the 1930s in Eric Ambler's classic A coffin for Dimitrios; the ordinary citizens (well, almost) of John le Carré's The Russia House, who are drawn into Cold War spy games; and the 1950s Vietnam of Graham Greene's The quiet American, with its portrait of American idealism and duplicity.

LibraryThing member BruceAir
Furst is the acclaimed master of the historical spy novel. He sets most of his work in Europe during the early days of World War II. Here he assembles an anthology of excerpts of the literary espionage genre (a favorite of mine). You don't get to enjoy the complete unfolding of a spy novel here, but you can relish the film noir atmospheres and memorable characters created by many great writers, many of whom moved in the secret world themselves during their careers.… (more)
4 more
LibraryThing member krbrancolini
"The Book of Spies" caught my attention because it is edited by Alan Furst, who also wrote the introduction. I have been reading Furst's excellent literary novels of espionage and I was curious to read works by other authors he recommends. Furst is often compared to Eric Ambler and Graham Greene, whom I've read. But what would Furst himself select? "A Coffin for Demetrios" is the first selection and there's one from "The Quiet American" by Graham Greene, but many of the other selections are unexpected and riveting. The only one I had read was the Ambler. I ran out and bought "The Quiet American," but I'm also going to read "Tremor of Intent" by Anthony Burgess, "Under Western Eyes" by Joseph Conrad, "Ashenden" by W. Somerset Maugham (probably the most intriguing selection in the entire anthology), and "The Tears of Autumn" by Charles McCarry. In his introduction Furst notes that the date of publication is important for each selection because they are essentially political novels, tied to and shaped by a particular place and time. I was struck by the variety among these selections and although I had my favorites, I was sorry when each ended. The anthology is not a substitute for the full-length novels, but rather provides an overview of the genre and serves a guide for further reading.… (more)
LibraryThing member Rucke
Not hugely entertaining...
LibraryThing member kerns222
Furst picks them for you. Eleven (I think) chapters from books of espionage, intrigue, and downright murder. Furst explains, "There were two standards for selection: good writing--we are here in the literary end of the spectrum--and the pursuit of authenticity."

I used the book to browse and then went for the full Ambler and McCarry in the library--why did I not hear of McCarry before?

… (more)
LibraryThing member justagirlwithabook
When I was studying English for undergrad, I had to purchase an excessive number of copies of literature textbooks and anthologies. This was one of them, and I haven't used it since, but it cost a decent chunk of change so it's sticking around.
Fewer