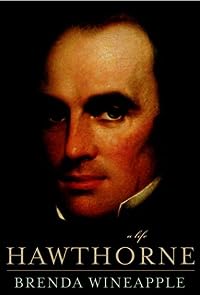 Hawthorne himself declared that he was not "one of those supremely hospitable people who serve up their own hearts, delicately fried, with brain sauce, as a tidbit" for the public Yet those who knew him best often took the opposite position. "He always puts himself in his books," said his sister-in-law Mary Mann, "he cannot help it." His life, like his work, was extraordinary, a play of light and shadow. [In this volume, the author] navigates the high tides and chill under-currents of Hawthorne's life ... In him, the quest of his generation for an authentically American voice bears disquieting fruit.-Dust jacket.

LibraryThing member SeriousGrace
While I haven't read any other biographies of Hawthorne (so far) I predict Wineapple's is going to be my favorite. For starters, while Wineapple delves into Hawthorne's lineage she isn't bogged down with multiple generations of pre-Nathaniel Hawthorne history. In fact, she begins Hawthorne's biography with the briefest of glimpses into his childhood before launching into the period when he first started dabbling with the art of writing (keeping a journal and drafting poetry). Mercifully, a writer is born almost immediately. Wineapple's biography reveals Hawthorne's contradictory character with thorough grace, revealing his charms and follies. It's a shame most of his letters were destroyed, not allowing Wineapple to delve deeper into his psyche. I can only imagine what she would have revealed! I was most touched by Hawthorne's over-35 year friendship with President Pierce. While Pierce was not the best president of this country, his relationship with Hawthorne was exemplary.… (more)

Melville : his world and work by Andrew Delbanco
Salem is my dwelling place : a life of Nathaniel Hawthorne by Edwin Haviland Miller
William James : in the maelstrom of American modernism ; a biography by Robert D. Richardson
Emerson : The mind on fire; a biography by Robert D. Richardson
Henry David Thoreau: A Life by Laura Dassow Walls
6 more
The Most Famous Man in America: The Biography of Henry Ward Beecher by Debby Applegate
Mark Twain : a life by Ron Powers
Edgar A. Poe : mournful and never-ending remembrance by Kenneth Silverman
Walt Whitman's America : a cultural biography by David S. Reynolds
My wars are laid away in books : the life of Emily Dickinson by Alfred Habegger
T.S. Eliot: An Imperfect Life by Lyndall Gordon
Fewer