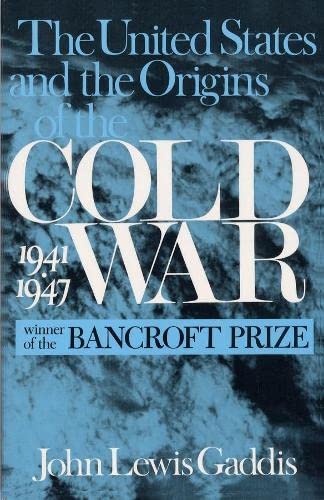 John Lewis Gaddis' acclaimed history of U.S. policy toward the Soviet Union during and immediately after World War II is now available with a new preface by the author. This book moves beyond the focus on economic considerations that was central to the work of New Left historians, examining the many other forces--domestic politics, bureaucratic inertia, quirks of personality, and perceptions of Soviet intentions--that influenced key decision makers in Washington, and in doing so seeks to analyze these determinants of policy in terms of their full diversity and relative significance.

LibraryThing member Schmerguls
This is a 1972 book which won the Bancroft Prize in 1973 so I read it. It does an excellent job reviewing the events which led to the Cold War, and demonstarated to me that the revisionists are wrong and that Harry Truman and Dean Acheson were right to pursue the course they did. Clearly Soviet Russia could have avoided the Cold War by foregoing its designs for taking over Europe.… (more)

Present at the Creation: My Years in the State Department by Dean Acheson
A tangled web : the making of foreign policy in the Nixon Presidency by William P. Bundy