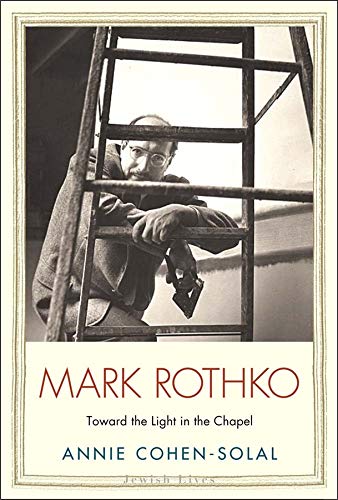 Mark Rothko : toward the light in the chapel

"Mark Rothko was not only one of the most influential American painters of the twentieth century; he was a scholar, an educator, and a deeply spiritual human being. Born Marcus Yakovlevich Rotkovitch, he emigrated from the Russian Empire to the United States at age ten, already well educated in the Talmud and carrying with him bitter memories of the pogroms and persecutions visited upon the Jews of Latvia. Few artists have achieved success as quickly, and by the mid-twentieth century, Rothko's artwork was being displayed in major museums throughout the world. In May 2012 his painting Orange, Red, Yellow was auctioned for nearly $87 million, setting a new Christie's record. Author Annie Cohen-Solal gained access to archival materials no previous biographer had seen. As a result, her book is an extraordinarily detailed portrait of Rothko the man and the artist, an uncommonly successful painter who was never comfortable with the idea of his art as a commodity"--… (more)

LibraryThing member timswings
In this biographical study on Rothko, Annie Cohen-Solal searches an answer to the question if there is a relation to Mark Rothko's Jewish background and his development into abstract art. His Jewish roots connects him to other artists who also developed in this way. She went for her research to the city Dinsk, now Daugavpils in Letland, where Rothko was born in 1903. Although his father was a progressive pharmacist, he sent his youngest son to the traditionalTalmud school. Cohen-Solal brings this schooling on the interpretation of texts into connection with Rothko's later abstract art. Cohen-Solal makes plausible that painting for Rothko was foremost a philosophical activity.… (more)
1 more
LibraryThing member berthirsch
Mark Rothko, Toward the Light in the Chapel
By Annie Cohen-Solal

A short concise insightful biography of one of the great Abstract Expressionist painters of the 20th Century.

Escaping the pogroms of czarist Russia, he emigrated with his parents and siblings in 1913. He was a 10 year old Talmud Torah student from an assimilated family. By the age of 18 he had taught himself English and become one of the top students at his Portland, Oregon High School winning a full scholarship to Yale University.

Already he had established himself as an exceptional intellect with a drive towards serious study. Disappointed with his Yale classmates whom he saw as more interested in sports and parties he left, disillusioned after 2 years settling in NYC. There he discovered art, attending classes in Jewish Settlement Houses and the Arts Students League.

For many years he existed on a teacher’s salary while he engaged the NYC art scene. Among those he drew support and inspiration from: Clyfford Still, Robert Motherwell, Barnett Newman, Adolph Gottlieb, David Hare, Hans Hoffman, William de Kooning, William Baziotes, and Jackson Pollack. As a group many of them became known as The Irascibles, their name indicating the brashness and seriousness with which they took on the established art world dominated by European museums, galleries and artists.

As the 1940s came to an end Rothko’s work had transformed, his paintings became more abstract and the signature style we now know so well came to light. His work received recognition, he had several successful gallery exhibits with Betty Parsons, Leo Castelli and Sidney Janis. Both MOMA and Peggy Guggenheim recognized his importance and by the mid-50s he was considered a giant.

He was commissioned to provide a series of murals for the 4 Seasons Restaurant in the newly built Mies van der Rohe/Philip Johnson Seagrams skyscraper but as it neared completion his distaste for the moneyed class, that the rich would be eating while his work considered mere decoration resulted in his pulling out, returning the ample commission. Eventually these red murals found a permanent home at the Tate Galleries in London.

His culmination was the Rothko Chapel in Houston, Texas. Commissioned by the de Menil family he dedicated the last years of his life to completing this masterpiece. He not only gave considerable attention to painting (using techniques from the Italian masters of the 1500s utilizing egg whites to help illuminate the paint from within) but also paid undue attention to the placement of his work, the lighting, all of which effected the viewer’s experience. What he searched for was a total experience for those who viewed his work; they become immersed and moved on a deep emotional level.

In the end, his health failing, a deep depression worsened by alcoholism, he committed suicide late at night alone in his studio. The de Menil Rothko Chapel opened the next year and became a spiritual destination for thousands of visitors including the Dali Lama, Nelson Mandela and Jimmy Carter.

Rothko’s inattention and disinterest to finances resulted in a decade long court battle over his estate. The Marlborough Gallery had become his sole representative and were found guilty of fraud. A family foundation was established, Rothko’s daughter and son took control of his legacy. A moving last scene in the book is their journey to their father’s birthplace, Daugavpils, Latvia where they established the Mark Rothko Art Center.… (more)
Fewer

Mark Rothko : a biography by James E. B. Breslin
Bernard Berenson: A Life in the Picture Trade by Rachel Cohen
Mark Rothko: A Retrospective by Diane Waldman
Jackson Pollock by Ellen G. Landau