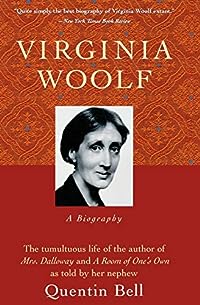 As the nephew of Viginia Woolf, Quentin Bell enjoyed an initimacy with his subject granted to few biographers. Originally published in two volumes in 1972, his acclaimed biography describes Virginia Woolf's family and childhood; her earliest writings; the formation of the Bloomsbury Group; her marriage to Leonard Woolf; the mental breakdown of the years 1912-15; the origins and growth of the Hogarth Press; her friendships with T. S. Eliot, Katherine Mansfield and Vita Sackvill-West; her struggles to write THE WAVES and THE YEARS; and the political and personal distresses of her last decade. Compelling, moving and entertaining, Quentin Bell's biography was awarded the James Tait Black Memorial Prize and the Duff Cooper Memorial Prize. It is a fitting tribute to a remarkable and complex woman, one of the greatest writers of the century.… (more)

LibraryThing member bordercollie
A stunningly-written biography, by her nephew, of the creative genius whose Bloomsbury group, formed early in the 20th Century, affected our society for the entire century. Inspirational and true to human nature.
2 more
LibraryThing member BenasReads
Very good biography wrote by one of Virginias family members.
LibraryThing member AliceAnna
I don't like Ms. Woolf any better knowing her history, but maybe I will be able to better understand her writings. On the other hand, however, Leonard Woolf was a saint!
Fewer