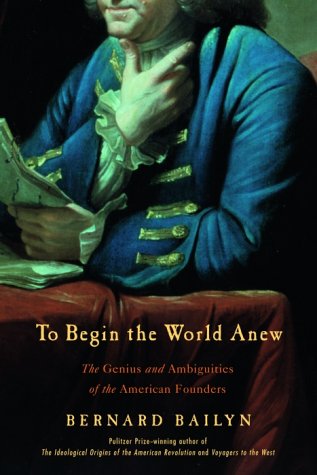 To begin the world anew : The genius and ambiguities of the American founders

With these character sketches of key figures of the American Revolution and illuminating probes of its circumstances, Bernard Bailyn reveals the ambiguities, complexities, and uncertainties of the founding generation as well as their achievements. Using visual documentation—portraits, architecture, allegorical engravings—as well as written sources, Bailyn, one of our most esteemed historians, paints a complex picture of that distant but still remarkably relevant world. He explores the powerfully creative effects of the Founders’ provincialism and lays out in fine detail the mingling of gleaming utopianism and tough political pragmatism in Thomas Jefferson’s public career, and the effect that ambiguity had on his politics, political thought, and present reputation. And Benjamin Franklin emerges as a figure as cunning in his management of foreign affairs and of his visual image as he was amiable, relaxed, and amusing in his social life. Bailyn shows, too, why it is that the Federalist papers—polemical documents thrown together frantically, helter-skelter, by Alexander Hamilton, James Madison, and John Jay in a fierce political battle two hundred years ago—have attained canonical status, not only as a penetrating analysis of the American Constitution but as a timeless commentary on the nature of politics and constitutionalism. Professor Bailyn concludes, in a wider perspective, with an effort to locate the effect of the Founders’ imaginative thought on political reformers throughout the Atlantic world. Precisely how their principles were received abroad, Bailyn writes, is as ambiguous as the personalities of the remarkably creative pro- vincials who founded the American nation.… (more)

LibraryThing member nbmars
This short book of five essays focuses on the role played by the unique circumstances of the American Revolutionaries as strangers in a strange land, and the effect of their isolation and newness (no landed aristocracy, no imbedded nobility, no grand manor houses generations old, no luxurious lifestyles as were possible on the Continent, no pomp, and constrained circumstances) on their creative thought. Bailyn writes with intelligence and vision without being abstruse, in five chapters on: American provincialism in general; Jefferson; Franklin; The Federalist Papers; and the influence of the American Revolution around the world. Adams, Madison and Hamilton are also discussed throughout.

Bailyn’s most controversial statements, in my opinion, are in the chapter on Jefferson. He acknowledges Jefferson’s contradictions, but spends much more time on his virtues than his failings. Further, he seems overawed about Jefferson’s encyclopedic interests and prodigious output. I’m sure there would have been others who accomplished as much if they owned over six hundred slaves during their lifetimes; Bailyn seems not to have considered how much one could have gotten done as a white male with a household full of slaves to address every quotidian (and not so quotidian) need.

Slavery aside, morality is a large topic of consideration throughout the essays, mostly in the sense of needing to balance freedom with control, in order to account for the “degree of depravity in mankind” (Madison). And, as Adams pointed out, since equality cannot be mandated, it is important to figure out ways to keep the plutocrats from taking over the body politic.

Bailyn rightly insists that since we still struggle with these issues, the concerns of the Founding Fathers remain our concerns. He charges us to continue “to probe the character of our constitutional establishment.” Good advice, and good reading.… (more)