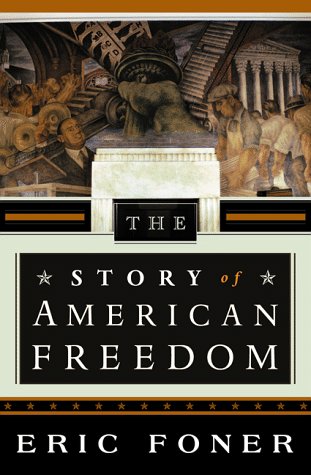 The story of American freedom

Freedom: a promised land, a battleground, America's cultural bond and fault line. The Declaration of Independence lists liberty among mankind's inalienable rights; the Constitution was framed to secure liberty's blessings. The United States bought the Civil War to bring about a new birth of freedom, World War II for the Four Freedoms, and the Cold War to defend the Free World.In Eric Foner's stirring history, freedom's story unfolds through aspiration and sacrifice, its meaning shaped not only in congressional debates and political treatises, but on plantations and picket lines, in parlors and bedrooms. Its cast of characters ranges from Thomas Jefferson to Margaret Sanger to Franklin D. Roosevelt; from former slaves seeking to breathe real meaning into emancipation to the union organizers, freedom riders, and women's rights advocates of our time.This landmark history shows the story of American freedom to be not a mythic saga but a vital, open-ended tale of accomplishment and failure, arecord of a people forever contending over the crucial ideas of their political culture.… (more)

Reconstruction : America's unfinished revolution, 1863-1877 by Eric Foner
The Fate of Liberty: Abraham Lincoln and Civil Liberties by Mark E. Neely
Free Soil, Free Labor, Free Men : The Ideology of the Republican Party Before the Civil War by Eric Foner
The Radicalism of the American Revolution by Gordon S. Wood