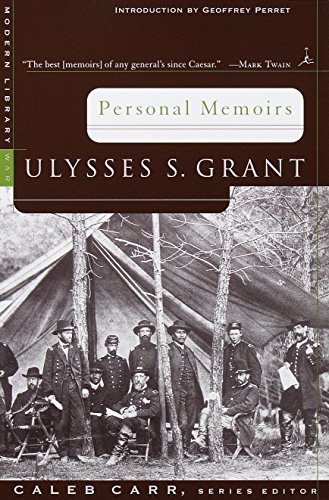 Among the autobiographies of generals and presidents, the Personal Memoirs of U.U. Grant ranks with the greatest. It is even more impressive in light of the circumstances in which it was created: Faced with terminal cancer, virtual bankruptcy, and a family he would leave without means of support, he took the advice of his publisher, mark Twain, and went to work. He completed the manuscript in eleven months-and died a week later, on July 23, 1885. Frank and unpretentious, Grant's memoirs tell the story of his boyhood in Ohio, his graduation from West Point, and the military campaigns in the West and Mexico that ended with his disgraceful resignation and a return to Illinois, where he ran the family store. Soon, however, began the rebellion that broke the Union and recast Grant's fortune, transforming him into the leader of the victorious Union armies in the War Between the States and giving him the perspective to describe intimately the capture of Fort Henry and Fort Donelson, the battles of Shiloh, Corinth, Vicksburg, the bloody Wilderness campaign, and Appomattox. Here is Grant the tactician, the alcoholic, the plain and tough professional soldier, the ideal commander-but most of all here is Grant the writer as he assesses himself and the events that forged his character, as well as that of the nation.… (more)

Memoirs are a military history of the Mexican-American War and the Civil War from Grant’s perspective as a West Point graduate and military officer.… (more)
LibraryThing member Schmerguls
5497. Personal Memoirs of U. S. Grant, by Ulysses S. Grant (read 4 Sep 2017) I have intended to read this work for over 20 years and finally have done so. It is full of interesting material, including an account of Grant's life before he went to West Point and quite a detailed account of his time in the Mexican War and a brief account of his time out of the Army when he was a clerk in Galena. When the Civil War broke out Grant returned to the Army and by ability rather than political pull advanced in position. One gets the idea that he was indeed an able officer--I know, he wrote the book--but the fact of his successes cannot be denied. Some of the account of military action is deathly dull but the account of much and of Grant's opinions is full of interest. The book does not cover anything of Grant's life after 1865, though he does mention that he was president. I for one am glad he was on the right side in 1861 and stood by his country and opposed the people who were trying to destroy the nation and preserve slavery, He is unequivocal in saying that slavery was the cause of he Civil War and is not fooled by the claim that the South was resisting aggression. The South wanted slavey to be secure and feared that slavery would be restricted by Lincoln. There can be no doubt about that.… (more)
LibraryThing member ibkennedy
Excellent and so readable
Fewer