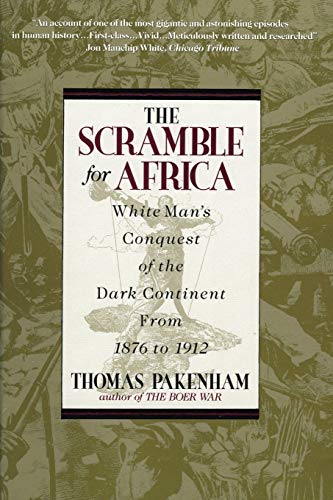 The scramble for Africa : white man's conquest of the dark continent from 1876-1912

The Scramble for Africa astonished everyone. In 1880 most of the continent was ruled by Africans, and barely explored. By 1902, five European Powers (and one extraordinary individual) had grabbed almost the whole continent, giving themselves 30 new colonies and protectorates and 10 million square miles of new territory, and 110 million bewildered new subjects. Thomas Pakenham¿s story of the conquest of Africa is recognised as one of the finest narrative histories of the last few decades. We are given arresting vignettes of the main players. Lord Derby, protesting at ¿this absurd scramble¿; the Belgian Emperor King Leopold II grabbing and ruthlessly exploiting the rubber deposits in the Congo; and Prince Otto von Bismarck casually munching on prawns at the Congress of Berlin while determining the fate of millions.… (more)

LibraryThing member bookblotter
I enjoyed this book quite a bit. A complex group of stories of European conquest and colonial subjugation of Africa in the 19th century interwoven nicely and well written by the author. Slavery, of course, reared its ugly head and played a part (by Europeans, Asians from the Middle East and some Africans subjugating other Africans) in portions of the narrative.

The conquests were by, of course, a who's who of European powers sometimes dividing up the continent in a friendly, pre-agreed way (among themselves) and sometimes playing power politics and fighting against each other. While Britain, France, Italy, Spain, Portugal, Germany all played their parts; the story of the Belgians in the Congo is quite interesting and prominent in the book and involves all sorts of deals and machinations with other powers.

All-in-all, not a moment of pride for Europeans. Obviously, similar things went on in North & South America, parts of Asia, Australia, New Zealand, islands in the Caribbean and in the Pacific and sundry portions of the globe, mostly earlier in time than the African continent subjugation.

A side issue just somewhat reflected in the book was the artificial splitting up of land into "countries" that didn't have continuity necessarily with the existing tribal groups. In other words, you ended up with country A including tribe 1 and a part of tribes 2 & 3, leaving the rest of 2 & 3 in other "countries." Some of those artificialities are reflected in tensions that still exist today on the continent.

Luckily for me, I was a nerd that collected stamps as a kid in the 1950s, so I had some exposure to the African colonies formed in the 19th century through the stamps. I just knew that background would come to some use!… (more)
9 more
LibraryThing member John5918
A first class overview of the history of the colonial project in Africa.
LibraryThing member J.v.d.A.
I abandoned this book about 250 pages in....just could not plow on through this pedestrian account any longer.
LibraryThing member BruceCoulson
A very thorough history of the European imperial ventures into 'Darkest Africa', focusing on the years 1876 to 1912, but giving ample background to explorations prior to those years. For those curious about the troubles of Africa, this provides excellent background.
LibraryThing member SeriousGrace
This is everything you want to know about the background of Africa's beginnings from 1878 to 1912. In a very comprehensive and detailed prose Pakenham uncovers the early "scramble" Europeans made to conquer the unknown "dark" territory. In just under 30 years most of the continent was claimed and "civilized" by five different greedy European powers.… (more)
LibraryThing member kday_working
Africa.... we all need to know the history of interactions between cultures and nations in the 19th century in order to appreciate the struggles in the 20th.
LibraryThing member nandadevi
Encyclopaedic. And readable. Although the full history of Africa is an African history, this story of European incursions into Africa and the horrors they inflicted give some context to the modern States of Africa, and the continuing cycle of poverty and violence there. I might add that this history isn't just about chronicling European avarice and exploitation. The role of the Arab world in slaving on the East coast of Africa was even more rapacious than the Atlantic slave trade, and the level of violence between African proto-States was reminiscent of the latest most extreme outrages in Saharan Africa. Sadly there is nothing much new under the Sun. This is history that needs to be told, and learnt.… (more)
LibraryThing member MiaCulpa
The very phrase "scramble for Africa" evokes images of late-Victorian explorers and statesmen carving up large tracts of a continent for themselves. The book itself is not a disappointment, as Pakenham injects some droll wit into the proceedings as we follow European explorers arrive, subjugate the locals, deal with the Arab slave traders from Zanzibar and surrounds and other Europeans as they grabbed as much territory as they could.

The Germans started late but still got Tanganyika and South West Africa, Leopold II of Belgium also snuck in and grabbed the Belgian Congo and the Lado Enclave, and broke all records in torture and slavery in the process. The Brits and the French got everything else, although all faced problems from the locals, who had the audacity to complain about Europeans bringing civilisation to them.

"The Scramble for Africa" is the best book I've read on Africa in the late nineteenth century.… (more)
LibraryThing member NikNak1
This is an excellent and highly recommended book - it is informative, educational and brilliantly written with a good amount of humour. Would recommend this in a second. It shows that history books can be written well and in an enjoyable manner and not in a boring and dull fashion
LibraryThing member DinadansFriend
The first book to read on the transformation of Africa in the late 19th century. There are penetrating character portraits, and a good deal of political conditions in /europe to which the cutting up of Africa seemed some kind of answer. the prose is quite readable, and the chronology of the material at the end of the book is quite illustrative. This book is relatively entertaining given the material.… (more)
Fewer

The rise and fall of the British Empire by Lawrence James
The fate of Africa : from the hopes of freedom to the heart of despair : a history of fifty years of independence by Martin Meredith
The great game : the struggle for empire in central Asia by Peter Hopkirk
The Blue Nile by Alan Moorehead
Dreadnought : Britain, Germany, and the coming of the great war by Robert K. Massie
7 more
Citizens : a chronicle of the French Revolution by Simon Schama
Tournament of shadows : the great game and race for empire in Central Asia by Karl Ernest Meyer
Stanley : the impossible life of Africa's greatest explorer by Tim Jeal
A history of the Arab peoples by Albert Habib Hourani
The rise and fall of the great powers : economic change and military conflict from 1500 to 2000 by Paul M. Kennedy
The slave trade : the history of the Atlantic slave trade, 1440-1870 by Hugh Thomas
The honourable company : a history of the English East India Company by John Keay
Fewer