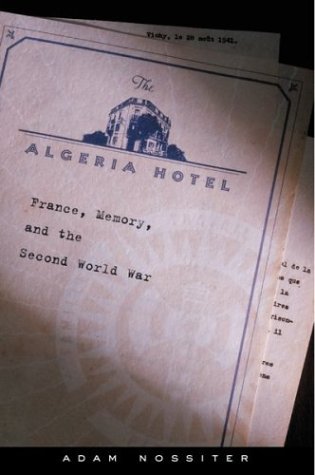 The Algeria Hotel : France, memory, and the Second World War

Adam Nossiter spent part of his youth in France. During those years, in the mid-1960s, President de Gaulle forged the myth that France bravely resisted the German occupiers of World War II and that the nation was innocent in the crimes of the Holocaust. Collaboration with Germany and the deportations of Jews were subjects not dwelt on -- not until many years later. THE ALGERIA HOTEL is Nossiter's intensely personal confrontation with the effects of this awakening to the underside of the French record in the war. For three years he lived and traveled in France, listening to people talk about the war -- mapping their stories, silences, evasions, and even lies. In Bordeaux, Nossiter follows the trial of Maurice Papon, the retired French official accused a half century later of orchestrating the deportation of Jews. He settles in Vichy, the seat of France's wartime government; shadowed by the Algeria Hotel, which housed the agency for Jewish affairs, Nossiter journeys into the dark heart of France's compromises with the Nazis. In Tulle, he listens for the echoes of a single afternoon when the Nazis carried out a terrible massacre of the town's residents. An artful weave of vivid portraits, clear-eyed reporting, and meticulous historical research, The Algeria Hotel is an absorbing and resonant portrait of a nation and its people. Illuminating the many ways painful memories of the past leave their mark on the present, Nossiter reveals deep truths about how we remember and why we forget. The result is a searching and beautifully written narrative of how the French today live their lives haunted by the war and its crimes.… (more)

And the show went on : cultural life in Nazi-occupied Paris by Alan Riding
Shtetl: The Life and Death of a Small Town and the World of Polish Jews by Eva Hoffman
Auschwitz and after by Charlotte Delbo
The Popes against the Jews: the Vatican's role in the rise of modern anti-semitism by David I. Kertzer
Americans in Paris : life and death under Nazi occupation by Charles Glass