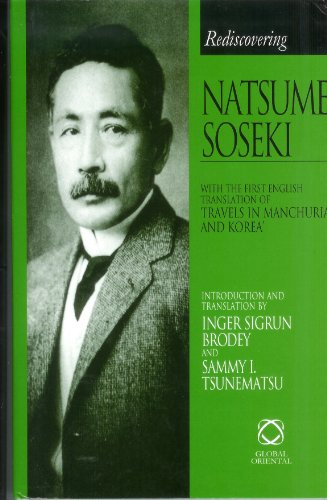 Rediscovering Natsume Sōseki : with the first English translation of Travels in Manchuria and Korea

First publication in English of Soseki s travels through Manchuria on the then recently-acquired South Manchurian Railway. 6-week travelogue including boat from Osaka to Dairen, railway up the Liaodong Peninsular to Fushun. Many descriptions of Manchuria. It is a lively, informative and sometimes very funny narrative, which reveals Sosekis wit and Western-style humour in observing the human condition, as well as the literary techniques that characterize his subsequent achievements in shaping the modern Japanese novel. The Introduction by Inger Sigrun Brodey provides both a new perspective on Soseki the man and writer, as well as an insightful commentary on the SMR journey itself and the place of the travelogue in Sosekis writings. A selection of Sammy Tsumematsus collection of previously unpublished photographs of Soseki is also included.… (more)