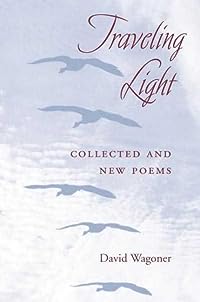 David Wagoner has won the acclaim of his peers and been compared with some of the most gifted poets in the English language: Emily Dickinson, James Wright, Robert Frost, Theodore Roethke. The Antioch Review has ascribed to him a"profoundly earthbound sanity," while Publishers Weekly credits him with a "plainspoken formal virtuosity" and a "consistent, pragmatic clarity of perception." His collections have garnered Poetry's Levinson and Union League Prizes, the Ruth Lilly Prize, and nominations for the American Book Award and the National Book Award. For his most recent collection, Walt Whitman Bathing, Wagoner was honored with the Ohioana Book Award in the category of poetry. Witty, eloquent, and insightful, Traveling Light offers new and familiar treasures from a master observer of both the natural and the human worlds. In a style by turns direct and intricate, Wagoner distills the essential emotions from people's encounters with each other, with nature, and with themselves. Through his compassionate but unblinking eyes, we see ourselves and the world that surrounds us more sharply delineated.  … (more)

Collected shorter poems, 1946-1991 by Hayden Carruth
Darkness Sticks to Everything Collected and New Poems by Tom Hennen
Border of a dream : selected poems of Antonio Machado by Antonio Machado
As is by James Galvin
On speaking terms by Connie Wanek
16 more
New and selected poems by Marvin Bell
The ginkgo light by Arthur Sze
Concerning the book that is the body of the beloved by Gregory Orr
Human dark with sugar by Brenda Shaughnessy
The Sacraments of Desire by Linda Gregg
Scrambled Eggs & Whiskey: Poems, 1991-1995 by Hayden Carruth
The world of the ten thousand things : poems 1980 - 1990 by Charles Wright
Lifelines : selected poems, 1950-1999 by Philip E. Booth
Last poems by Paul Celan
Sweet Will: poems by Philip Levine
The shape of the journey new and collected poems by Jim Harrison
Nightworks : poems, 1962-2000 by Marvin Bell
Drawing the line : poems by Lawson Fusao Inada
The collected poems of Theodore Roethke by Theodore Roethke
Wherever you lay your head : poems by Jane Miller
Hinge & Sign: Poems, 1968-1993 by Heather McHugh
Fewer