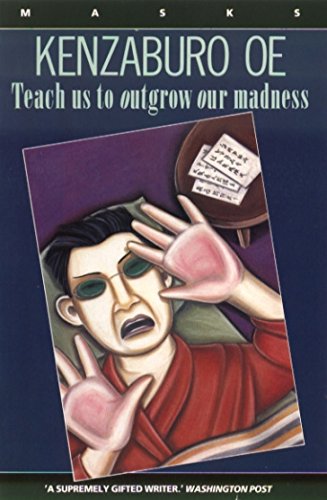 Teach us to outgrow our madness

These four novels display Oe's passionate and original vision. Oe was ten when American jeeps first drove into the mountain village where he lived, and his literary work reveals the tension and ambiguity forged by the collapse of values of his childhood on the one hand and the confrontation with American writers on the other. The earliest of his novels included here, Prize Stock, reveals the strange relationship between a Japanese boy and a captured black American pilot in a Japanesevillage. Teach Us to Outgrow Our Madness tells of the close relationship between an outlandishly fat father and his mentally defective son, Eeyore. Aghwee the Sky Monster is about a young man's first job -- chaperoning a banker's son who is haunted by the ghost of a baby in a white nightgown. The Day He Himself Shall Wipe My Tears Away is the longest piece in this collection and Oe's most disturbing work to date. The narrator lies in a hospital bed waiting to die of a livercancer that he has probably imagined, wearing a pair of underwater goggles covered with dark cellophane.… (more)

LibraryThing member MeditationesMartini
THIS IS A REVIEW OF THE TITULAR NOVELLA, EXCLUSIVE OF SUNDRY FELLOWTRAVELLERS COLLECTED HEREIN

This book gutted me, and when I tell you now before you read it that it is obviously informed by (I will not say based on) Kenzaburo Ōe's relationship with his autistic son Hikari ("light"), I suspect it will gut you too. It's a father–son story set against Ōe's frequent narrative safety net of distant fathers grappling with their demons, caring-malevolent mothers doing cruel things to protect the ecological health of the family unit, sons trying to bring out the howls of anguish within them, irrelevant wives, etc. Here, that is the background (roughly speaking, though it busts out at the end per below), and rotundly in the foreground is a fat man (never just "the man," always "the fat man") who wants so much to communicate with his developmentally disabled (and also fat) son that he convinces himself he can feel his thoughts/fears/pain and communicate with him through the skin-to-skin bond formed their big and little, damp and sticky hands. This is a story about their adventures on the subway and at the noodle shop and with the optometrist and in the polar bear enclosure, and if you have ever wept with longing to have a little one to love or sat gobsmacked by your perfect child (I have done both), what happens to break their bond in the end will act as a sobering tonic to all those overwrought feelings and remind you that no new life is a a blank slate, there's never just two people in the room, that no matter how much we might be tempted to disappear into a brave new dyadic world where none of "that other stuff" counts and LOVE OUR KID RIGHT, every parent is always (already) also a child, sibling, lover, friend and foe ... ad nauseam!… (more)
2 more
LibraryThing member JimmyChanga
I've not yet read the 1st novella in this book. I may revisit it later. The 4/5 star rating is for the rest of this collection:"Prize Stock": my favorite; a strange and powerful tale that really resonated with me. 5/5"Teach Us to Outgrow Our Madness": strange is just the beginning here. But there is tenderness here too. The ending wasn't as satisfying as I'd hoped, but the writing is solid. 3.5/5"Aghwee the Sky Monster": really good story. 3.5/5… (more)
LibraryThing member technodiabla
Wow! This was an exceedingly challenging read, especially The Day He Himself Shall Wipe Away My Tears. I enjoyed all 4 novellas and that they shared some thematic similarities. Particularly, strained and damaged relationships between sons and fathers, and the process of spinning towards insanity. Prize Stock was my favorite and the most accessible. I'm not sure this collection would appeal to "most" people but it you've read other Oe works, can make your way through Faulkner or similar, then this might be for you.… (more)
Fewer