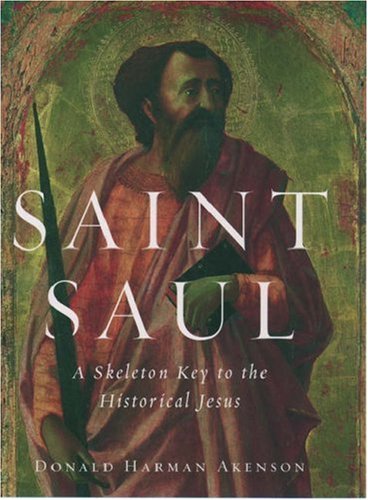 Saint Saul : a skeleton key to the historical Jesus

In Saint Saul, Donald Harman Akenson offers a lively and provocative account of what we can learn about Jesus by reading the letters of Paul. As the only direct evidence of Jesus we have that were composed before the destruction of the Second Temple in 70 CE forever altered the outlook of the Christian and Jewish faiths, Akenson claims that these letters are the most reliable source of information. He dismisses the traditional method of searching for facts about Jesus by looking for parallels among the four gospels because they were handed down to us as a unit by a later generation. Akenson painstakingly recreates the world of Christ, a time rich with ideas, prophets, factions, priests, savants, and god-drunk fanatics. He insistently stresses throughout the Jewishness of Jesus, referring to Jesus and Paul as Yeshua and Saul, as they were then known. As an eminent historian, Akenson approaches his subject with a fresh eye and a scholarly rigor that is all too rare in this hotly disputed field.… (more)

LibraryThing member stevenschroeder
If the popularity of the World Wrestling Federation is evidence of the audience for a well-orchestrated brawl, Saint Saul should have no trouble finding readers. Akenson leaps into the ring with a bravado that could obscure the academic virtuosity he shares with his primary targets-particularly Morton Smith and Dominic Crossan; but little doubt remains that participants in this battle have chosen to enter a public arena where entertainment and scholarship mix. Akenson argues that any quest for Jesus as an historical figure should begin with the earliest available documents-not the synoptic Gospels, but the authentic letters of Paul. Akenson counters 2000 years of Christianizing by consistently avoiding Hellenized forms when naming the objects of his inquiry: Saul, not Paul; Yacov, not James; Yeshua, not Jesus. Saul's letters constitute the one source of information about Yeshua that survived the destruction of the temple in 70 C.E. (which, in Akenson's understated simile, had the impact of a nuclear explosion) more or less intact. As a result, those letters may contain information that is unfiltered by the two forms of Judahism (Christianity and rabbinic Judaism) that devised successful strategies for temple worship without a temple. Readers will be both entertained and informed. Whether they are convinced that Saul is a "skeleton key" or not, they will come away with a deeper understanding of the modern quest for the historical Jesus and of the pre-70 worlds inhabited by Yeshua and Saul.… (more)
1 more
LibraryThing member millsge
The writer reviews everything about Paul in order to to 'create a 'skeleton key' to unlock the 'historic' Jesus.' But the author forgets or ignores one thing that undermines his thesis completely - 'Paul knows not Jesus.' This lack of recognition led Kuhn to give this title to one the chapters of his work 'Who is this King of Glory/', 'The Shout of Paul's Silence.' If Paul were speaking of an 'historical' Christ, his descriptions of his visit to Jerusalem would have been entirely different and completely reverential; something like, '...and the very brother of our Lord Jesus, James, himself told me how...' There is nothing like that and he has no respect for Peter at all. This should make it clear that Paul's Christ is something other than a literal incorporated God named Jesus.… (more)
Fewer