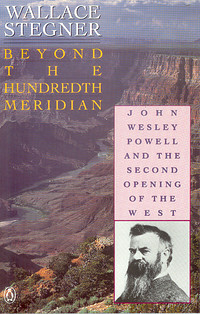 Beyond the hundredth meridian : John Wesley Powell and the second opening of the West

Pulitzer Prize winner Wallace Stegner recounts the remarkable career of Major John Wesley Powell, the distinguished ethnologist and geologist who explored the Colorado River, the Grand Canyon, and the homeland of the Southwest Indian tribes. This classic work is a penetrating and insightful study of the Powell's career, from the beginning of the Powell Survey, in which Powell and his men famously became the first to descend the Colorado River, to his eventual ouster from the Geological Survey. In masterful prose, Stegner details the expedition, as well as the philosophies and ideas that drove Powell.

LibraryThing member stevesmits
I bought this book during our first trip to the Southwest. Before this trip I had not thought too much about the West; it's there and it's big, that's about the extent of my perception.

Stegner's book, now over 60 years since publication, is a worthy read on several counts. First, the writing is
Show More
terrific. I had not read any works by Stegner, known for mainly his western fiction, but this writer is one of the most skilled in literature; I will read more of his works. Second, the book uses John Wesley Powell and his career as an exposition of the West, particularly its geology and climate. Powell isn't too much a major figure in our history and he deserves the recognition that Stegner gives him. His exciting passage down the Colorado River is what he is most known for in the popular mind, but it was his career in Washington as head of the Bureau of Ethnology and of the US Geodetic Survey that is most remarkable. Powell understood in an amazingly foresighted way the real issues facing the settlement and long-term use of the West. ("West" in this context is mainly the Colorado plateau.) Much fantastical thinking of the region existed in the mid and latter 19th century -- that it was a place where small-scale homestead farming without effort or toil was to be achieved. Powell knew that the key characteristic of the region is its aridity. The annual rainfall could not support farming or grazing without careful manipulation of the water resources from rivers and streams. He saw that unplanned development, especially under the control of speculating and greedy land conglomerates, would only bring ruin. His "Grand Plan" for cooperation among the users of the region's resources ran into the opposition of powerful forces that portrayed his aims as counter to the American notion of free-wheeling unrestrained exploitation. He never completely countered these checks on his vision, but many of his ideas finally took root in land use policy in the 20th century. The interplay of the politics, lobbying, economic motivation, science, bureaucracy, and more in Powell's time is strikingly (and depressingly) similar to the forces that govern today's political dynamics.

Also of great interest is Powell's scholarly work on the Native American population of the West. At the time of overt warfare between the US government and the native tribes of the West, Powell carried out a scientific study of the diverse elements of native culture, almost at the last moment when this was still possible. His contributions in the field preserve a view of native life that would have otherwise been lost.

Powell was a major force the the opening of the West between the plains and the Pacific coast. Stegner's book is an excellent way to learn about this remarkable man and deepen insights into this unique area of our country.
Show Less
7 more
LibraryThing member Smiley
Thrilling biography of the Major John Wesley Powell and his exploration of the Grand Canyon. The biography also explaines what Powell believed was the best way to settle the west. A true American original.
LibraryThing member nemoman
This book was my introduction to Stegner and it hooked me on all his writing. It is essentially a biography of John Wesley Powell, a man primarily known for his exploration of the Colorado River. His river trips have an action-adventure feel, whereas his latter carreer explores the problems of
Show More
aridity in the far west and how misguided federal ploicy has created the problems (tensions between water availability and land use) that still dog this section of the country today. Powell was an autodidactic scientist whose insights were profound, but largely ignored.
Show Less
LibraryThing member co_coyote
No Westerner can say he understands the West until he has read this book about John Wesley Powell. I'm afraid water problems of the past will pale compared to those in the future, brought on not so much by climate change, but by ignoring the lessons Powell tried to teach us about the arid West.
LibraryThing member marshapetry
Excellent audio but probably better as a text book, probably are maps that help the story. Still, good listen
LibraryThing member reader1009
nonfiction/history-biography.

Kind of interesting to learn about the surveying of the Colorado River (Utah, Arizona, etc.) but does not consider the Native American's experiences much, if at all.
LibraryThing member richjj
Beautifully written, passionate and sweeping. More than I could take in. My first Stegner book, and it frankly impressed me with the depth of his story, the liveliness of his characters, and his applications to modern society.
I thought this would be the story of how Powell explored the southwest
Show More
U.S. That is certainly a wild story, but less than half the book. It covers 30 years of Powells career: frontier upstart, unlikely explorer, lobbyist, celebrated scientist, political gamesman, bureaucratic father figure. Years ago vaguely remember hearing that later in the East Powell became an unpopular voice of caution that western water could not support large scale settlement. The last chapters tell how he ruffled feathers and established water and land policies that shaped western politics, land use, and conservationism. Stegner wrote in the 1950s with the limitations of a man in that day, and his applications are still relevant today. But I wonder if the west will hold strong for responsible resource management against the politics of growth and short-term prosperity. The pattern of seasonal widespread wildfires and dropping reservoir water levels is worrying, and I wonder if a modern-day Powell could even prevail on better judgement.
Show Less
LibraryThing member untraveller
A superb book about the latter half of the 19th century in the American West w/ J.W. Powell as the chief protagonist. Literate and provocative....where are these writers today? As I read this I was simultaneously reading/scanning First Through the Grand Canyon by Michael Ghiglieri. Working at the
Show More
Grand Canyon, I've been told by countless people how poor Stegner's book is and some of those comment on how great Ghiglieri's book is. They are absolutely, completely, and totally bonkers. I've since found out that most of them know or are friends of Ghiglieri. That is certainly the only way he could have gotten the reviews he got and placed on the cover.
Anyway, to cut it short, Stegner knows how to write, does not feel the need to use a book as a means of starting/creating a vendetta against someone he doesn't like, and is considerably more balanced and literate in his approach. A great book by Stegner and worthy of the accolades. Grand Canyon people do not read....
Show Less
Fewer

Cadillac desert : the American West and its disappearing water by Marc Reisner
Where the bluebird sings to the lemonade springs : living and writing in the West by Wallace Earle Stegner
This house of sky : landscapes of a Western mind by Ivan Doig
Lasso the wind : away to the New West by Timothy Egan
Wallace Stegner and the American West by Philip L. Fradkin
5 more
Wallace Stegner : his life and work by Jackson J. Benson
Collected Stories of Wallace Stegner by Wallace Earle Stegner
Desert solitaire : a season in the wilderness by Edward Abbey
Encounters with the archdruid by John McPhee
The big burn : Teddy Roosevelt and the fire that saved America by Timothy Egan
Fewer