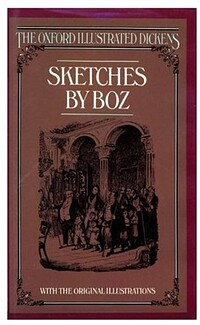 Sketches by Boz : illustrative of every-day life and every-day people

Sketches by Boz, the first volume of the new Oxford Dickens, was also the title of Dickens's first book. It is a collection of sixty pieces, mostly humorous although there is nothing funny about 'A Visit to Newgate', which first appeared as contributions to magazines and newspapers in the mid 1830s. They are distinguished by his sharp and often satirical observation of social situations and London characters; but, with one exception, they are works of fiction. Fourteen can be described as short stories, but most are sketches presented to us as reportage. They show why Dickens was recognised as a brilliant new talent from the outset of his career. In the absence of any manuscripts, the text of each piece (with one exception) is based upon the first published version. They offer Dickens as he appeared to his very first readers in the mid 1830s, and as he has not been seen since. Dickens edited later editions, cutting contemporary references, oaths and sexual innuendo. The consequence of reading Dickens as he was is startling, for these pieces both offer a direct reflection of the social scene in London of the period, and have a raciness which Dickens excised from later printings. This work rediscovers the young Dickens.… (more)

LibraryThing member nosajeel
I had read a number of these before but had never read Sketches by Boz in its entirety. Dickens first book, published when he was twenty-four and already on his third or fourth career, contains his earliest writings, ranging from semi-fictional sketches to a series of "tales" that range from farce
Show More
to melodramatic tragedy. They contain much of what one would find throughout his career: walking through the streets of London, middle-class families, clerks, comedy, satire of pretension, tragedy, farce, a preoccupation with prisons, etc. Many of the pieces are excellent, virtually none of them are bad or even seem particularly immature, but for most people Sketches is fairly superseded by the novels which take many of the same types of characters and scenes and embed them in a much more compelling and readable format. That said, Sketches was very enjoyable and I would expect to read many of the individual pieces in it again.
Show Less
11 more
LibraryThing member john257hopper
A mixed bag of sketches, with some very funny and moving ones, and a few that were mediocre and forgettable. Some of the best were redolent of Dickens's later distinctive style, though these were his earliest published works, first appearing in magazines between 1833-36. The first seven sketches,
Show More
grouped under the title The Parish, were good and funny, especially The Election for Beadle and The Four Sisters. The sections headed Scenes and Characters were rather more variable, though as ever Dickens excels when covering the plight of the poor and wretched, for example in Gin-Shops, A Visit to Newgate and The Prisoners' Van. A Christmas Dinner should become a seasonal favourite. The sketches detailing the coming in of the omnibus were very good as well.

The latter set of Tales were varied, with a few dull ones, but also some very funny ones, esp The Boarding House, Mr Minns and his Cousin (Dickens's first published piece as A Dinner at Poplar Walk), Horatio Sparkins and The Bloomsbury Christening. The Black Veil and The Drunkard's Death were very haunting.

The illustrations by George Cruikshank were marvellous, better than those by Phiz in my view, with a Hogarthian sort of feel about them. 4/5
Show Less
LibraryThing member jasonlf
I had read a number of these before but had never read Sketches by Boz in its entirety. Dickens first book, published when he was twenty-four and already on his third or fourth career, contains his earliest writings, ranging from semi-fictional sketches to a series of "tales" that range from farce
Show More
to melodramatic tragedy. They contain much of what one would find throughout his career: walking through the streets of London, middle-class families, clerks, comedy, satire of pretension, tragedy, farce, a preoccupation with prisons, etc. Many of the pieces are excellent, virtually none of them are bad or even seem particularly immature, but for most people Sketches is fairly superseded by the novels which take many of the same types of characters and scenes and embed them in a much more compelling and readable format. That said, Sketches was very enjoyable and I would expect to read many of the individual pieces in it again.
Show Less
LibraryThing member Maura49
As a personal project in Dickens Bi-Centenary year I am trying to read some of his books that I had never got around to and this is one that I have been dipping into for years but somehow never quite connecting with it.
I have finally done so and am glad to have made the effort despite the variable
Show More
quality of these ‘prentice pieces, originally written for a number of different publications.

In the section titled “Scenes” we see London of the 1830’s through Dickens eyes. He knew his city intimately and here he vividly evokes it’s sights and sounds just before the Victorian era dawns. He shows us pawn shops and the gin-soaked criminal quarter of Seven Dials. He visits Newgate Prison, inaugurating his lifetime interest in penal institutions. He takes us inside the London theatres and the cheerful vulgarity of Astley’s Amphitheatre. He sees everything and he also listens. Through him we hear the voices of costermongers and omnibus drivers, prison officers and shoppers, the pleasure seekers at Vauxhall Gardens .

These vibrant pieces are perhaps the best of these early writings. In “Characters” and “Tales” we see his early attempts at imaginative writing. In later life he was critical of many of them, noting the rushed quality they had and seeing many of these short pieces as “crude and ill-considered, and bearing obvious marks of haste and inexperience.” They are interesting though in showing us the development of the writer’s mind and we can see where characters such as Mr Pickwick and Sam Weller came from. I find myself in agreement with Thea Home who wrote the introduction for this ‘Oxford’ edition. She points out that the sketches have a special fascination in both fore-shadowing the work of a writer of genius and also revealing the young Boz . We are surely walking alongside Dickens himself when we encounter the patrons and performers of ‘Private Theatres’ whose proprietors may be “..an ex-scene painter, a low coffee-house keeper, a disappointed eighth-rate actor, a retired smuggler, or uncertificated bankrupt.”

I particularly enjoyed “The Tuggses at Ramsgate”, partly set on a pleasure steamer on the Thames and brimful of vivid characters in a tale of a rise in fortune and social climbing gone sadly awry.
“..the City of London Ramsgate steamer was running gaily down the river. Her flag was flying, her band was playing, her passengers were conversing; everything about her seemed gay and lively,- No wonder- the Tuggses were on board.”

I did come to the conclusion that the ‘dipping’ approach has something to be said for it with this collection, as reading straight through does become tedious. This is particularly the case with some of the weaker sections of this edition such as “The Mudfog Papers” which I would not recommend as the humour is forced and tedious in the extreme.
Show Less
LibraryThing member charlie68
Funny and interesting book about life in London in the early nineteenth century. Mostly humourous sketches with some darker sentimental ones within. Shows Dickens spreading his wings as a writer fortelling the heights to which he would achieve.
LibraryThing member Smiley
Great Dickens. The reader gets Dickens' characters and descriptive power with a minimum of his ripe sentimentality. A win/win. Good place to start for those new to the author or those that say they don't like Dickens. For those familar with the author's body of work the reader will find the germ of
Show More
future novels in this early work. The last piece, "A Drunkard's Death", is outstanding.
Show Less
LibraryThing member JBD1
Some of Dickens' earliest published writings; there are hints here of what's to come in these vignettes, sketches, and short tales, but I can't say I found the whole collection particularly compelling.
LibraryThing member dasam
In these early works you can find hints of Dickens' later novels, characters, and themes. The wry humor is also reminiscent of Twain with a British rather than American dialect.
LibraryThing member EricCostello
Some of the earliest published work of Dickens, mixed with a few pieces he added when the pieces were collected for the first time in book form. Some vintage Dickens in spots, foreshadowing later characters. The second half, which is more fiction than journalism, drags a bit with repeated themes,
Show More
usually of bachelors getting done for.
Show Less
LibraryThing member AliceAnna
Excellent sketches, but I just had a hard time getting into them. I need a plot. So I much preferred the tales that were included later on in the book.
LibraryThing member stbyra
OK, we know these ere written for a magazine in serial form. We know he got paid by the word. But there's not a superfluous word anywhere in there. And we once again realize what a savage wit Dickens was in the guise of a wide-eyed innocent reporting on what he sees. In a few chosen words he makes
Show More
us see the foolishness and stupidity of people, and yet if you were those people, you'd never know it, he's that clever in his descriptions. His social reformer tendencies also come out in these sketches, especially when he talks about drunkedness, or children being forced into "unspeakable acts" (prostitution). But you turn the page to the next sketch, and you're laughing out loud at the fixes people can get themselves into by deluding themselves that they're not "low" or "common". If you've never read it, do it. It will literally open up a whole different world to you.
Show Less
LibraryThing member Scarchin
Collection of short stories - or "sketches" - about everyday life in London. They range from the very humorous to the tragic.
I experimented with using Libravox with this. On the plus side - a free, complete, audio copy of the book. On the down side, there was a HUGE difference in the quality of
Show More
readers from chapter to chapter.
Show Less
Fewer