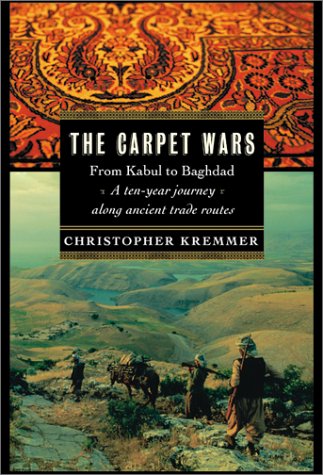 The carpet wars : from Kabul to Baghdad : a ten year journey along ancient trade routes

"Apart from oil, rugs are the Muslim world's best-known commodity. While rugs are found in most Western homes, the story of religious, political, and tribal strife behind their creation is virtually unknown. In The Carpet Wars, journalist Christopher Kremmer chronicles his fascinating ten-year journey along the ancient carpet trade routes that run through the world's most misunderstood and volatile regions - Afghanistan, Iran, Iraq, India, Pakistan, and the former Soviet republics of Central Asia." "Christopher Kremmer's odyssey through the crescent of Islamic nations began in the early 1990s, when he arrived in Afghanistan to meet the communist-backed president, Mohammed Najibullah. On the outskirts of Kabul, mujahideen rebels were massing while the carpet dealers of the old city continued to ply their timeless trade. Kremmer was in Kabul when the mujahideen turned their guns on one another after ridding the country of the hated communists. He was there when the Taliban came and the army of religious students - aided by the wealthy Arab radical Osama bin Laden - emerged from the scorched earth to implement their vision of "a pure Islamic state."" "A travel memoir, The Carpet Wars offers a personal, vivid, and revealing look at Islam's human face, wracked by turmoil but sustained by friendship, industry, and humor. It is also a historical snapshot of countries at the center of global confrontation that exploded onto the homefront on September 11, 2001."--BOOK JACKET.… (more)

LibraryThing member edwinbcn
The carpet wars by Christopher Kremmer is a hefty volume of some 480 pages. I had started reading the with quite a lot of interest, but gradually got increasingly irritated about the pretense of it.

The book is published with an introduction, acknowledgements, notes (10 pages), bibliography and suggested readings (7 pages), a glossary (5 pages), a timeline (1979-2003) and an index. These features give the book the feel of a very thoroughly documented volume, from which the reader might learn a great deal about "the Islamic heartlands".

It also gives us the feeling that the author or publisher wishes to lift the book up from the level of journalism to background documentation or a more steady nature. However, despite aforementioned props the editor / author has failed to do so. In the introduction, the author says that the largest part of the book was written before 2001, but the reader never finds out when exactly various parts of the book were written. In most publications of this kind, the acknowledgements or in another part of the book the reader may find an overview with thanks to publishers who printed or published earlier versions of articles or reports. Another elegant solution would have been printing a date or year at the top or foot of each section, but this has also been omitted. Meanwhile, the author makes minimal reference to current affairs which might give a clue to the date of the piece, with the exception of his mention that he had been to places before or had met people before up to 20 years earlier. One gradually gets the feeling that these temporal references have been intentionally omitted or removed.

Unfortunately, the respective articles have very little substance (only 10 pages of notes were added). Most of the text consists of the authors adventures, describing people and places in a freely detailed journalistic style, with small embellishments about history and anecdotes, to entertain the reader. A red thread throughout the book is the author's claimed interest in carpets. At times this motive is forced into the text, as in the case of the story of the man who wants to sell just one carpet. It much more seems that the author has inserted this thread as a ploy to connect the different stories, and create a sense of unity. The title remains puzzling, because there are no wars, really, let alone "carpet wars" whatever that might refer to.

The book consists of nine parts, most of which comprising three chapters, introducing Kabul, Kandahar, Peshawar, Baghdad, Tajikistan, Kashmir and Esfahan among other places. But after finishing the book, nothing memorable enough remains, except for descriptions and references to the Taliban's destruction of the Bamiyan Buddhas. But without a distinctive time frame, events or theme, all sections seem very similar, and towards the end of the book one wonders if there is an overarching story to be told at all.… (more)
1 more
LibraryThing member MiaCulpa
A slightly disjointed amble through central Asia, taking in Afghanistan, Iran, Iraq and Pakistan. A bunch of not overly connected travel pieces makes "The Carpet Wars" sometimes confuses the reader as to when events happened and the sometimes oblique connections to carpets can make digesting the book hard work. Kremmer makes up for this though with some evocative writing of the areas of central Asia that rarely appears in travel articles.… (more)
Fewer

The Age Book of the Year shortlist

Shadow of the Silk Road by Colin Thubron
Tournament of shadows : the great game and race for empire in Central Asia by Karl Ernest Meyer