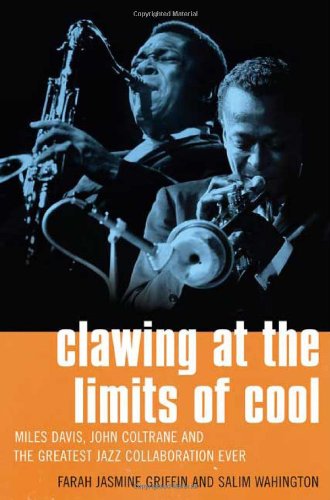 Clawing at the limits of cool : Miles Davis, John Coltrane and the greatest jazz collaboration ever

When the renowned trumpeter and bandleader Miles Davis chose the members of his quintet in 1955, he passed over well-known, respected saxophonists such as Sonny Rollins to pick out the young, still untested John Coltrane. What might have seemed like a minor decision at the time would instead set the course not just for each of their careers but for jazz itself. "Clawing at the Limits of Cool "is the first book to focus on Davis and Coltrane's musical interaction and its historical context, on the ways they influenced each other and the tremendous impact they've had on culture since then. It chronicles the drama of their collaboration, from their initial historic partnership to the interlude of their breakup, during which each man made tremendous progress toward his personal artistic goals. And it continues with the last leg of their journey together, a time when the Miles Davis group, featuring John Coltrane, forever changed the landscape of jazz. Authors Farah Jasmine Griffin and Salim Washington examine the profound implications that the Davis/Coltrane collaboration would have for jazz and African American culture, drawing parallels to the changing standards of African American identity with their public personas and private difficulties. With vastly different personal and musical styles, the two men could not have been more different. One exemplified the tough, closemouthed cool of the fifties while the other made the transition during this time from unfocused junkie to a religious pilgrim who would inspire others to pursue spiritual enlightenment in the coming decade. Their years together mark a watershed moment, and "Clawing at the Limits of Cool" draws on both cultural history and precise musical detail to illuminate the importance that their collaboration would have for jazz and American history as a whole.… (more)

A New History of Jazz by Alyn Shipton
Visions of Jazz: The First Century by Gary Giddins
Lost Chords: White Musicians and Their Contribution to Jazz, 1915-1945 by Richard M. Sudhalter