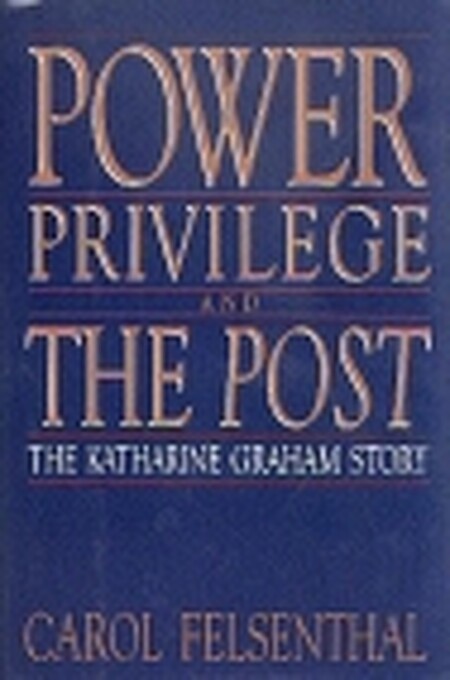 Power, privilege, and the Post : The Katharine Graham story

Katharine Graham has been called the most powerful woman in the world, and she is perhaps one of the richest. In the wake of her decision to print the Pentagon Papers, she became the most famous newspaper publisher in America. During the Watergate investigation, Richard Nixon's attorney general, John Mitchell, threatened, "Katie Graham is gonna get her tit caught in a big fat wringer if that's published." She didn't flinch and became, to many, a figure of awe. "There's one word that brings us all together here tonight," Art Buchwald announced at her seventieth birthday party in 1987, "and that word is f̀ear.'" The scores of luminaries gathered for the event - senators, CEOs, Supreme Court justices, columnists, movie stars, Cabinet secretaries, even the president of the United States - laughed appreciatively. The laughter of some was tinged with amazement, for they knew her when her husband, Philip Graham - Harvard Law graduate, clerk to Justice Felix Frankfurter, pal of JFK and LBJ, a dazzler who had Washington eating from his palm - ran The Washington Post, which her father had given him. They would never have imagined that the timid wife who walked two steps behind her husband - "a big brown wren," one friend called her - could become the radiant woman toasted affectionately by Ronald Reagan. Kay Graham had grown up in a house staffed by servants. Her father, Eugene Meyer, preoccupied by affairs of state and the economy (he headed the Federal Reserve Board and held other important posts), was a Wall Street millionaire turned public servant par excellence who became a newspaper publisher when he bought the bankrupt Washington Post in 1933. Her mother, Agnes Meyer - "sort of a Viking," as Kay remembered her, "very bright, and utterly contemptuous of everybody else"--Tirelessly promoted her friendships with the likes of Auguste Rodin, Thomas Mann, John Dewey, and Adlai Stevenson, but alternately ignored and belittled her children. Marriage to a man once described as "Agnes Meyer in men's clothes" left Kay shrinking in the background, until the summer day in 1963 when Phil Graham killed himself and she was forced to take over the company. Power, Privilege, and the Post is the story of how Kay Graham grew through sheer determination: at first anxiously dependent on the often patronizing men around her; then stunningly cruel, as she fired one after another of her top editors and executives; and finally triumphant, as she built a spectacularly profitable conglomerate and a newspaper that grew to have international influence.… (more)

LibraryThing member labwriter
Katharine Graham, b. 1917. I found Felsenthal's biog to be very readable. She includes notes and sources, so I'm not sure what the previous reviewer means by "not well researched" since the reviewer doesn't say. Graham was a wealthy, powerful woman. I didn't much like her. She once said to a reporter who worked for her, "You mean you have to live on your salary?" Yet for all that she had, the power and the privilege, she was still a very insecure person. The Washington Post was her father's newspaper. Her husband, Phil Graham, married the boss's daughter, which is how Phil Graham became publisher of the newspaper.

This biography covers a lot of recent newspaper history and is a fascinating look at the convergence of journalism and politics, particularly from about the 1960s-1980s. How did journalism get to where it is today in 2010? Books like these help to make that more understandable.… (more)

Personal History by Katharine Graham
Fit to print : A.M. Rosenthal and his Times by Joseph C. Goulden
Chicago tribune : the rise of a great American newspaper by Lloyd Wendt
Worldly Power: The Making of the Wall Street Journal by Edward E. Scharff
Taking on the world : Joseph and Stewart Alsop, guardians of the American century by Robert W. Merry
6 more
The first casualty : from the Crimea to Vietnam : the war correspondent as hero, propagandist, and myth maker by Phillip Knightley
Staying tuned : a life in journalism by Daniel Schorr
Edward R. Murrow and the birth of broadcast journalism by Bob Edwards
Minding the store; a memoir by Stanley Marcus
Legacy : a biography of Moses and Walter Annenberg by Christopher Ogden
A Journey for Our Times : A Memoir by Harrison E. Salisbury
Fewer