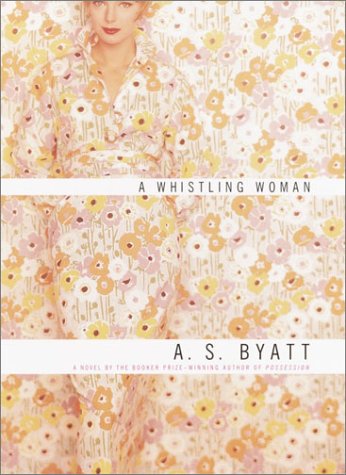 "The triumphant conclusion to Byatt's quartet depicting the clashing forces in English life from the early 1950s to 1970. While Frederica - the spirited heroine of THE VIRGIN IN THE GARDEN, STILL LIFE and BABEL TOWER - falls almost by accident into a career in television in London, tumultuous events in her home county of Yorkshire threaten to change her life, and those of the people she loves. In the late 1960s the world begins to split. Near the university, where the scientists Luk and Jacqueline are studying snails and neurones and the working of the brain, an 'anti-university' springs up. On the high moors nearby, a gentle therapeutic community is taken over by a turbulent, charismatic leader. Visions of blood and flames, of mirrors and doubles, share the refracting energy of Frederica's mosaic-like television shows. The languages of religion, myth and fairy-tale overlap with the terms of science and the new computer age. Darkness and light are in perpetual tension and the meaning of love itself seems to vanish; people flounder - often comically - to find their true sexual, intellectual and emotional identity."… (more)

L. S, M.S. degree paper
A Whistling Woman is the final book in the Frederica Quartet. It continues the story of Frederica Potter and the rest of the Potter clan, along with a whole host of other interesting characters, including Frederica‟s lover computer programmer John Ottokar and his twin Paul-Zag, the scientists Luk Lysgaard-Peacock and Jacqueline Winwar, Vice-Chancellor of the North Yorkshire University Sir Gerard Wijnnobel, lysergic-acid-dropping psychiatrist Elvet Gander, rabble-rouser Jonty Surtrees, and the charismatic Manichean Josh Lamb/Joshua Ramsden, who sees blood dripping from everything. Julia Corbett and Simon Moffitt, from Byatt‟s previous novel The Game, are also mentioned briefly.
— 3 more
New York Times
By far the strongest parts of ''A Whistling Woman'' have to do with the unfolding drama of a Quaker therapeutic community called the Spirit's Tigers, which is gradually taken over and turned into a religious cult by a former mental patient named Joshua Lamb, who, while still a ''plump, pitiable boy,'' witnessed his father's murder of his mother and sister. Byatt's writing about Lamb's gradual descent into self-protective madness and the way in which unbearable personal trauma becomes organized into a lunatically meaningful philosophical system is superb, and demonstrates the empathic powers that are available to her every bit as much as her daunting intellectual reach.
''A Whistling Woman'' is defiantly not for everyone, especially since Byatt is less concerned with keeping the reader happy than with keeping her eye on the vast prospect before her, and the larger arc of her vision is hard to keep in sight even if you're familiar with the three earlier novels.
The Scotsman
The broad sweep of Byatt’s literary and intellectual enquiry is undoubtedly impressive. There’s a section where Frederica refers to her own previous books which had been described by reviewers as "irritatingly clever". It’s clearly a reference to some of Byatt’s previous books that have received similar criticism. But the problem is not that A Whistling Woman is clever - the more clever writers the better. The problem is that her subject matter and her ‘cleverness’ are not always integrated into the narrative. Thus, although the novel comes in at over 400 pages, its narrative could be contained in considerably less.
The Guardian
Whatever the eventual failures of A Whistling Woman and of the tetralogy as a whole, its massive ambition can never be called into question. Rejecting sensation and attitude, Byatt has instead explored sense and thought, and the problematic notion of how they can possibly be represented in fiction. And like the characters here whose ideas prefigure the search for a Theory of Everything, she has attempted to create a kind of fictional unity that few other writers could even imagine. Watching it break apart, one senses, is just as interesting for her as watching it struggle to cohere. For her readers, this is not always the case, but it's a very close-run thing.

LibraryThing member Niecierpek
It's the fourth book in the family saga, this is one of the things the series is.
In book 1- Virgin inthe Garden, we meet Frederica Potter and then follow her and her family through the years. The first book is solidly rooted in this idea, but by book three, and then definitely in book four, we wander into much less structured novel, something that Frederica herself would undoubtedly call "laminations". There are bits and pieces of different writing forms: poems, letters, newspaper articles, novels inside novels, fragments of religious texts, philosophy pieces
all united by the theme of the changing life of the 50s, 60s, and 70s, but much less focused on one main character. It all beautifully comes together though.… (more)
4 more
LibraryThing member LadyHax
I first began reading Byatt's Potter quartet almost ten years ago for a final year English seminar for my undergraduate degree. We studied the third of the series, Babel Tower, and having started at the third, with the fourth not yet released, I decided to read the books in reverse order. And so it passed that I read Babel Tower, Still Life then Virgin in the Garden before eventually coming to the final instalment, The Whistling Woman.

Byatt is undoubtedly amongst my favourites of contemporary authors. The texture of her books is simply magnificent, the many layers, the references and symbolism that I know I do not even yet understand the full breadth thereof, but will enjoy discovering when reading her books again in the years to come.

In examining the changing times of the 1960s, Byatt succeeds in providing a critical account of the changes wrought to the world by contemporary processes of globalisation; what we are experiencing now, Byatt seems to say, is nothing new. The difficulties in the university were, for this university worker, utterly chilling - although it did make me yearn for the days when students did actually care about, well, anything.

The Whistling Woman was an odd finale to the quartet, both satisfying and unsatisfying. I have never understood, however, why people in the novels dislike Frederica so much. I've always quite liked her and will miss her very much.… (more)
LibraryThing member karl.steel
A great book.

My only real complaint is that Byatt doesn't show what happens when the police break up the demonstration at the variously titled NYU or UNY (North Yorkshire University). She's led us to despise the spiritualist, romantic, medievalist, Tolkienite excesses of the late 60s American/European student movement, while, yes, complicating matters somewhat by witnessing to its responsibility for the incipient animal liberation movement and cui bono critiques of reason. But when the students and their comrades assault NYU/UNY, smashing Elizabethan artifacts, vandalizing public sculpture, burning down ancient manors, stupidly demanding an end to the requirement that its students learn, all for their undergraduate degree, another language, math, and the humanities,* when they sing Ent-songs and psychedelic lyrics, give astrology lectures, and basically nauseate thinking people, by which I mean me, it would have been important to complicate all this by showing the police cracking their heads. Some readers would have cheered that on, too, but I suspect most would have felt accused by the sight of the foundations of their liberal world, revealed.

Instead we get some lovemaking.

* see this excellent point, where Frederica attends an interdisciplinary conference on the mind: "Frederica had expected to find these literary papers the most interesting. She had grown up in the narrow British educational system which divides like a branching tree, and predestines all thirteen-year-olds to be either illiterate or innumerate (if not both). She had grown up with the assumption that be literary is to be quick, perceptive and subtle. Whereas scientists were dull, and also--in the nuclear age--quite possibly dangerous and destructive. She thought of F. R. Leavis's Education and the University, which she had studied, and which had said that the English Department was at the centre of any educational endeavour. This suddenly seemed, as she listened to [D.H.:] Lawrence's dangerous nonsense abstracted from Lawrence's lively drama and held up for approval, to be nothing more than a Darwinian jockeying for advantage, a territorial snarl and dash.

What was important, she thought, is to defend reason against unreason."… (more)
LibraryThing member pepe68
excellent, but quite demanding
LibraryThing member bostonbibliophile
In the end a satisfying conclusion to the Frederica Potter series. I feel like 1/3 of the book could have been cut though. There is a big plot that is built up only to end in tragedy and a lot of characters I did not care about. But I guess it paid off in the end.
Fewer