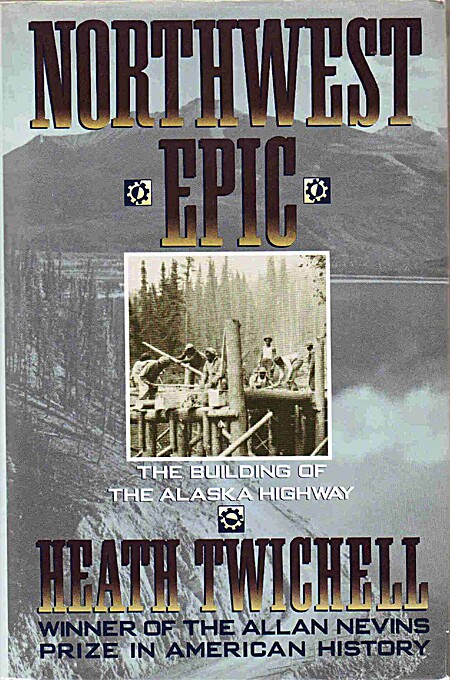 Northwest epic : the building of the Alaska Highway

"Northwest Epic is the panoramic story of the courageous U.S. Army Engineers and civilian contractors who toiled in the tense months after Pearl Harbor to build a 1,500-mile emergency supply line through the rugged Canadian Rockies to isolated military bases in Alaska. The construction of this winding gravel road--GI's called it the ALCAN--was very much an all-American adventure: blacks, whites, and natives working together under the harshest extremes of climate and terrain--racing to bolster Alaska's defenses and deter another Japanese attack on North American soil." "It is a story of ambitious men, such as Lieutenant General Brehon B. Somervell, the Army's suavely ruthless chief logistician, who brooked no opposition to his grandiose schemes. "Dynamite in a Tiffany Box" some called him. It is the story of Master Sergeant Wansley Hill and thousands of other black soldiers who, unwanted by their country for duty on the front lines, nonetheless proved themselves steadfast heroes in the land of the midnight sun. And it is also the story of natives like Charlie McDonald, a guide whose intimate knowledge of the land--with its dense forests, impassable muskeg bogs, and unmapped mountain valleys--was used by the Army Engineers to help build a road that has brought fundamental change to a once-remote corner of the North American continent." "The Alaska Highway--with its hundreds of bridges, chain of airfields, and oil refinery and pipeline system (known as CANOL)--opened to traffic in late 1942 and was in full use one year later. Though one of the greatest feats of twentieth-century macro-engineering, this huge project sparked as much protest as patriotism. Critics argued that the road was in the wrong place and would have little postwar value; a well-publicized investigation of CANOL's excesses gave a critical boost to the career of Senator Harry S. Truman." "Despite such controversy, the completion of the highway provided a historical watershed for the territory of Alaska, for in the decades that followed, the land would be propelled, often reluctantly, from a pristine refuge, a nineteenth-century land inhabited by natives, dreamers, and rugged individualists, into the twentieth century." "In the tradition of David McCullough's The Path Between the Seas, Heath Twichell's Northwest Epic is a sweeping and richly textured history, a book that tells of almost forgotten hardships and heroics during the darkest days of World War II."--BOOK JACKET.Title Summary field provided by Blackwell North America, Inc. All Rights Reserved… (more)

Northwest passage : the great Columbia River by William Dietrich
The Thousand-Mile War by Brian Garfield
The Good Rain: Across Time and Terrain in the Pacific Northwest by Timothy Egan
Fishcamp: Life on an Alaskan Shore by Nancy Lord
Alaska, an American Colony by Stephen W. Haycox
10 more
The men who united the States : America's explorers, inventors, eccentrics, and mavericks, and the creation of one nation, indivisible by Simon Winchester
Alaskan apostle; the life story of Sheldon Jackson by J. Arthur Lazell
One Man's Gold Rush: A Klondike Album by Murray Morgan
The Northwest Coast: Or, Three years' Residence in Washington Territory by James G. Swan
Along the Alaska Highway by Alissa Crandall
The last grand adventure by William Bronson
Going to extremes by Joe McGinniss
Pig War islands by David Richardson
Historic Sites Along the Oregon Trail by Aubrey L. Haines
Homestead by Annick Smith
Fewer