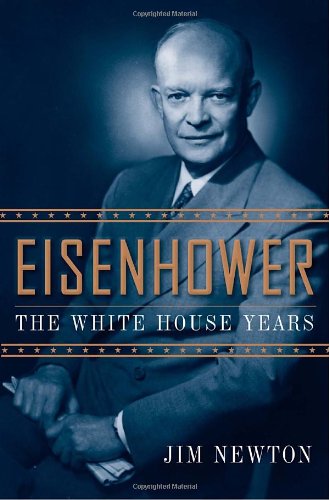 Newly discovered and declassified documents make for a surprising and revealing portrait of the president we thought we knew. Belittled by his critics as the babysitter-in-chief, Eisenhower ground down Joseph McCarthy, stimulated the economy to lift it from recession, and turned an $8 billion deficit in 1953 into a $500 million surplus in 1960. The President Eisenhower of popular imagination is a benign figure, armed with a putter, a winning smile, and little else. The Eisenhower of veteran journalist Jim Newton's rendering is shrewd, sentimental, and tempestuous. Admired as a general, he was a champion of peace. In Korea and Vietnam, in Quemoy and Berlin, his generals urged him to wage nuclear war. Time and again he considered the idea and rejected it. And it was Eisenhower who appointed the liberal justices Earl Warren and William Brennan and who then called in the military to enforce desegregation in the schools.--From publisher description.… (more)

LibraryThing member jrgoetziii
Very well done. IN a couple of places I found awkward language but on the whole, solid prose, a balanced approach to the major issues and players of 1950s Washington, and a striking portrait of one of the finest forgotten figures in United States history.
3 more
LibraryThing member gbelik
This bio focuses on Ike's political life rather than his military career. Despite an unfortunate predilection for clandestine capers, Eisenhower presided over 8 pretty peaceful years. This book increased my respect for him and his caution as the US and the Soviet Union learned to deal with their nuclear arsenals.
LibraryThing member rivkat
Very positive biography of a stolid Republican who had a temper and loved golf, and delegated a lot of important decisions to his subordinates. Weirdly, the book spends essentially no time on Ike as general: if I were to say “he oversaw D-Day,” I’d only be spending about a paragraph less than the book on the actual details of what he did/decided. I know it's called "The White House Years," but actually the book takes half its time getting there, and it could've used more on Eisenhower's war experiences and whether they affected him at all as president. Newton takes the position that Eisenhower was basically indifferent to racial discrimination (despite his famous comment to Earl Warren about how white girls shouldn’t have to sit next to black boys, which Newton concludes probably did occur) and thought that “both sides” were too aggressive, but sent federal troops to Little Rock to preserve the power of the federal government when directly challenged. Ike also oversaw what was, at the time, a “successful” covert operation against the government of Iran, and unfortunately we took the wrong lessons from that, trying to replicate it across the developing world where we wanted to win proxy battles with the Soviets by hook or by crook.… (more)
LibraryThing member nbmars
I previously reviewed another product of current scholarship on Eisenhower, Ike’s Bluff by Evan Thomas. This second review is best read in conjunction with the first. I listened to this book rather than read it; accordingly, I have not included quotes from the author.

Newton’s book is more comprehensive than Thomas’s; it does not have the narrow focus on Ike’s nuclear strategy that the Thomas book has. Thus we learn more about Ike’s early life, his relationships with his wife and his brothers, his somewhat ambiguous position on civil rights, his appointments to the Supreme Court and subsequent dealings with the Court, and his illnesses during the presidency, all of which Newton covers admirably.

In particular, Newton recounts Eisenhower’s stand on civil rights thoroughly and sympathetically. When, in 1957, Governor Orville Faubus of Arkansas defied the Court’s order to desegregate Little Rock’s schools by using the National Guard to keep blacks out of high school in Little Rock, Ike was incensed. While he privately disagreed with the Court's desegregation decision, he believed it was his responsibility to enforce the law and decisions of the Supreme Court. Not trusting the Arkansas Guard, he first nationalized them and then ordered them to return to their armories. Next, he sent in the redoubtable 101st Airborne Division to carry out the Federal court order and protect the black students.

[Faubus responded by shutting down Little Rock high schools for the 1958-1959 school year. Incredibly, this elevated him to the Gallup Poll’s 1958 list of “Ten Men in the World Most Admired by Americans.”]

Newton’s analysis of Eisenhower’s famous valedictory speech in January, 1961, in which he coined the term “military-industrial complex,” is fair-minded and enlightening. Ike decried the expansion of the complex, but he realized that growth was necessary to cope with the exigencies of the Cold War. Eisenhower deplored not so much the existence of the complex as its necessity. [You can read the full-text of this speech online, here.]

Newton maintains that Ike was powerful and effective in such a quiet, low-key way that recognition of his brilliance eluded many. But his leadership qualities are such that those who are now involved in politics would do well to take a closer look.

Discussion: I did not detect serious differences of opinion between the two writers, although Newton gives more credence to the conveyance through India of a threat to use nuclear weapons to end the Korean War than Thomas does.

Newton emphasizes Eisenhower’s natural inclination and consistent policy to seek a middle ground in domestic controversies. He also applauds Eisenhower's legacy of peace and prosperity in spite of continuous and serious challenges. Like other authors, he argues that Eisenhower's penchant for golf and cards did not diminish his ability to attend to his presidential duties.

Newton does not totally neglect Ike’s flaws, such as his somewhat mixed record on civil rights. Also, he attributes Ike’s long silence regarding the outrages of McCarthyism as a deliberate strategy, believing that McCarthy would fall from his own excesses. In this Ike was correct, but the process took a longer time than many critics would have preferred.

Moreover, while Ike avoided large-scale conflicts, he delighted in covert action such as the CIA sponsored coups in Iran and Guatemala. Although sometimes successful in the short term, some of these adventures had long-term adverse effects. For example, he tolerated the planning of a small-scale invasion of Cuba, which ultimately morphed into the Bay of Pigs disaster. And the U.S. is still suffering from the blowback of the CIA-backed overthrow in Iran in 1953.

As befalls many historians, an admiration for the subject of study leads to an accentuation of strong points and a diminution of failings. This book is not a hagiography, but Newton does manage a subtle skewing, in Ike’s favor, both in what he omits, and how he interprets that which he includes.

Evaluation: I found this book absorbing and entertaining. Since I already know something of Ike’s history, I slightly preferred the more succinct and focused “Ike’s Bluff” to this more comprehensive biography. Both books provide a very positive take on Eisenhower. Like any histories, they are best read in conjunction with other treatments from across the interpretive spectrum.

The Rise of Theodore Roosevelt by Edmund Morris
Colonel Roosevelt by Edmund Morris
Nixon and Kissinger : partners in power by Robert Dallek
Ike : an American hero by Michael Korda
Traitor to His Class : The Privileged Life and Radical Presidency of Franklin Delano Roosevelt by H. W. Brands
16 more
The Man Who Saved the Union: Ulysses Grant in War and Peace by H. W. Brands
Washington : a life by Ron Chernow
Means of ascent by Robert A. Caro
Henry Clay : the essential American by David Stephen Heidler
The years of Lyndon Johnson. [Volume 3], Master of the senate by Robert A. Caro
The bully pulpit : Theodore Roosevelt, William Howard Taft, and the golden age of journalism by Doris Kearns Goodwin
American Lion: Andrew Jackson in the White House by Jon Meacham
John Quincy Adams : American visionary by Fred Kaplan
Eisenhower : soldier and president by Stephen E. Ambrose
Lincoln by David Herbert Donald
Lincoln president-elect : Abraham Lincoln and the great secession winter 1860-1861 by Harold Holzer
Theodore Rex by Edmund Morris
The Age of Eisenhower by William I. Hitchcock
American sphinx : the character of Thomas Jefferson by Joseph J. Ellis
Lone star rising : Lyndon Johnson and his times, 1908-1960 by Robert Dallek
Flawed giant : Lyndon Johnson and his times, 1961-1973 by Robert Dallek
Fewer