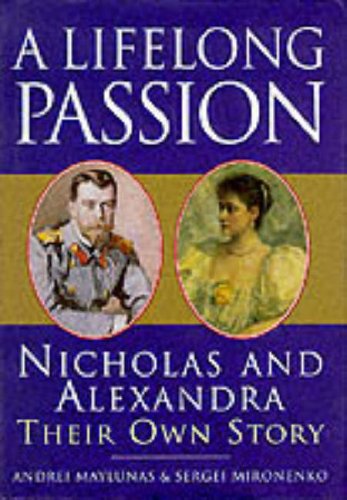 A lifelong passion : Nicholas and Alexandra :their own story

by Emperor of Russia Nicholas

In the darkest days of the Stalinist era of the Soviet Union, when all talk of the Romanovs was punishable at the very least by banishment to Serbia, a group of archivists were exempt. They sorted and filed the thousands of letters and photographs of the last Tsar of Russia, Nicholas II, his wife, Alexandra (a granddaughter of Queen Victoria), and their five children. In all, some 13,000 letters have survived. Those between 1889 and 1914 have never before been published. They run the gamut from matters of state to intimate expressions of love and longing. In addition there are the letters of their four daughters and their only son, the haemophiliac Alexis, whose health was to introduce the crucial and some say malign influence of Rasputin. The editors also draw on Nicholas's diaries, letters to his mother, and the diaries and memoirs of their close contemporaries. It includes first hand accounts of the murder of Rasputin in 1916 and the assassination of the Romanovs at Ekaterinburg in 1918.… (more)

LibraryThing member susanbooks
Take this book's title seriously: it really is only the story of Nicholas and Alexandra, told through their letters and diaries, as well as those of their friends and family, with various supporting contextual documents. Each letter or diary entry is silently edited so you never know if you're reading the entire thing or a small piece, except in extreme instances when the authors include no more than a sentence or two per diary entry/letter. The editing makes for a concentrated, dramatic, tragic story: so in love, so destined to be apart, at last happy together, so many daughters, finally an heir . . . then, well. It reads quite novelistically. But tragic stories and novels are constructed; history is messy, with multiple, intersecting plots and characters and real-life ambiguities. This story is too streamlined for any of that reality to come through (the editors charmingly discuss this in their introduction). Though we're certainly aware of the outside world, it's vague and at a remove (perhaps as Nicky and Alix perceived it?) and so the book feels dream-like rather than historical. If this were a novel, I'd give it a 5. If a history, let's say a 3. So as a hybrid I'd give it a 4. Then I remember it had me reading 200 pages until 2:00 am and I knock it up a half star.… (more)

The last tsar : the life and death of Nicholas II by Ėdvard Radzinskiĭ
The Romanovs : the final chapter by Robert K. Massie