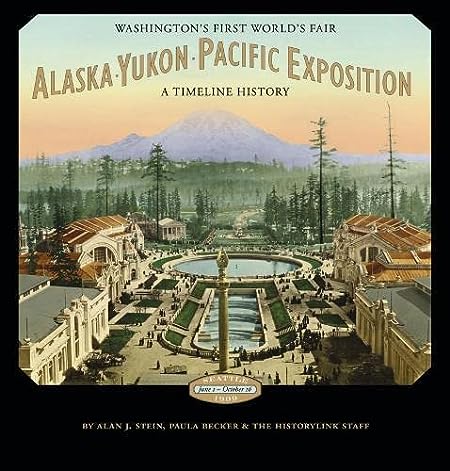 Seattle : History Ink/HistoryLink : in association with the University of Washington Press, c2009.

This richly illustrated and well-researched volume chronicles the Alaska-Yukon-Pacific Exposition, held in Seattle in 1909. The 3.7 million visitors to the fair during its four-month run, on what was to become the University of Washington campus, beheld a cornucopia of exhibits housed in an astonishing collection of buildings and enjoyed the carnival-like - and sometimes controversial - entertainments of the Pay Streak midway. Starting with the Klondike Gold Rush in 1897, authors Alan J. Stein and Paula Becker recount in detail the history of the fair that brought Seattle and Washington into the national spotlight. The A-Y-P Exposition was a major community effort for a state that was only twenty years old. It was the first world's fair to make a profit, it provided a platform for advocates of woman suffrage, and it set the general plan for the University of Washington campus that endures to this day.… (more)

Signed by various authors and contributors

The future remembered : the 1962 Seattle World's Fair and its legacy by Paula Becker
Vanishing Seattle (Images of America) by Clark Humphrey
Seattle, now & then by Paul Dorpat
Classic houses of Seattle : high style to vernacular, 1870-1950 by Caroline T. Swope
Skid road : an informal portrait of Seattle by Murray Cromwell Morgan
24 more
On American Soil : How Justice Became a Casualty of World War II by Jack Hamann
Sexless Oysters and Self-Tipping Hats : 100 Years of Invention in the Pacific Northwest by Adam Woog
Pioneer Square : Seattle's oldest neighborhood by Mildred Tanner Andrews
Seattle by Nard Jones
Eccentric Seattle : pillars and pariahs who made the city not such a boring place after all by J. Kingston Pierce
Blazing the way; or, True stories, songs and sketches of Puget Sound and other pioneers by Emily Inez Denny
Rising Tides and Tailwinds : The Story of the Port of Seattle, 1911-2011 by Kit Oldham
Ivar: The Life and Times of Ivar Haglund by Dave Stephens
Native Seattle : histories from the crossing-over place by Coll-Peter Thrush
Washington State by Charles Pierce LeWarne
Puget's Sound : a narrative of early Tacoma and the southern Sound by Murray Cromwell Morgan
The great extravaganza : Portland and the Lewis and Clark Exposition by Carl Abbott
Seattle: Then & Now by James Madison Collins
Seattle Now & Then: Volume 2 by Paul Dorpat
The untamed Olympics; the story of a peninsula by Ruby El Hult
Place of Learning, Place of Dreams : A History of the Seattle Public Library by John Douglas Marshall
The dry years : prohibition and social change in Washington by Norman H. Clark
Utopias on Puget Sound : 1885-1915 by Charles Pierce LeWarne
The last wilderness by Murray Cromwell Morgan
Seattle, past to present by Roger Sale
The Collector : David Douglas and the Natural History of the Northwest by Jack Nisbet
One Man's Gold Rush: A Klondike Album by Murray Morgan
Digressions of a Native Son by Emmett Watson
The wet side of the mountains, or, Prowling western Washington by William C. Speidel
Fewer