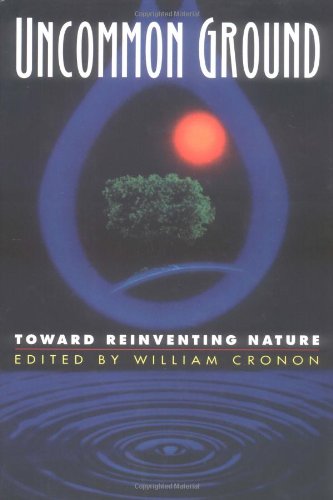 Nature: the wilderness that environmentalists try to protect from industrial despoliation; the spectacular national parks where people seek refuge from their everyday urban lives; the endangered plants and animals that now need the shelter of science and law to survive; the rain forests, mountains, deserts, oceans, rivers, and lakes we would like to see as unspoiled, unchanging. These conceptions of nature, so familiar and powerful that we take them for granted, are deeply flawed because they too often leave people out of the picture. The original essays in this volume, by leading scholars from many disciplines, examine the problems that flow from a viewpoint that severs human beings and human activities from their place in nature. The essays draw on evidence from many corners of our cultural landscape, from the parks of Frederick Law Olmsted to the cool confines of The Nature Company's stores, from the Amazon rain forest and the Garden of Eden to the virtual world of cyberspace. Together, they point toward new environmental values that affirm a responsible human place in nature. On such a foundation we can meet the challenges of the present and build an environmentalism for the twenty-first century.… (more)

LibraryThing member bexaplex
Uncommon Ground is an insightful criticism of the American idea of nature. In particular it highlights some of the intellectual pitfalls of the contemporary environmental movement, while suggesting diverse alternatives toward a more pluralistic, humane and productive movement.

I can't write a review of an academic book without a comment about academic style, so here it is: interdisciplinary programs often highlight academia's strict disciplinary constructs. Upon meeting another theory or method, academics say "how fascinating!" and then describe the phenomenon in the language of their own discipline. The Conclusion is a humorous illustration of this; the participants describe their experience of the seminar rather like the fable of the blind man and the elephant - some relished the commonality of thought (the two environmental historians), some the constructive disagreement (women's studies), etc. In this case it doesn't detract in the slightest from the book's message, since each perspective has a voice, but I get a kick out of imagining how the discussions were framed and led.

In reading this book in 2007, I skipped the two essays I had marked in 2002: "Reinventing Eden: Western Culture as a Recovery Narrative" by Carolyn Merchant (boring, unfocused and uninsightful) and "Universal Donors in a Vampire Culture: It's All in the Family: Biological Kinship Categories in the Twentieth-Century United States" by Donna J. Haraway (what the heck is she talking about).

Ecology Fragmentation in the Fifties by Michael G. Barbour - ecology, history of science

Nature as Community: The Convergence of Environment and Social Justice by Giovanna Di Chiro - environmental justice

Simulated Nature and Natural Simulations: Rethinking the Relation between the Beholder and the World by N. Katherine Hayles and Toward a Philosophy of Nature by Robert P. Harrison - philosophy… (more)

Forest Dreams, Forest Nightmares : The paradox of old growth in the Inland West by Nancy Langston
The Organic Machine: The Remaking of the Columbia River by Richard White
The republic of nature : an environmental history of the United States by Mark Fiege
A Sand County almanac, and sketches here and there by Aldo Leopold
The machine in the garden : technology and the pastoral ideal in America by Leo Marx