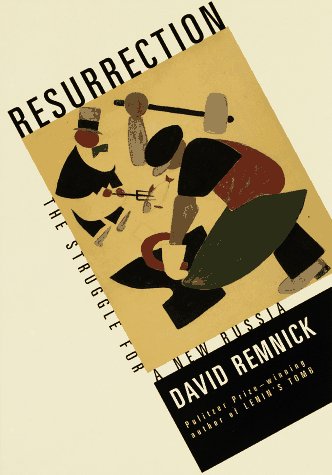 Resurrection : the struggle for a new Russia

Resurrection plunges the reader directly into the thick of events so that one all but feels Yeltsin's breath upon one's face - he is drunk one day, in command the next, as volatile as the fragmented country he tries to lead. Remnick's new Russia springs to life through vivid portraits of its players: the half-Jewish anti-Semite Zhirinovsky, "a hater, a crank, a nut"; the young (and purged) economist Yegor Gaidar, champion of "shock therapy" and market reform; Vladimir Gusinsky, Russia's Citizen Kane ("a first-generation capitalist living in a jungle world with few rules or restraints"); Aleksandr Solzhenitsyn, who returned from a twenty-year exile to find a country freed from communism but still steeped in misery - and nostalgia. These portraits emerge against a background dominated by the war in Chechnya, which Remnick visits in a bloody and unforgettable chapter, and a Moscow in turbulent transition.… (more)

The Man Without a Face: The Unlikely Rise of Vladimir Putin by Masha Gessen
Autopsy on an empire : the American ambassador's account of the collapse of the Soviet Union by Jack F. Matlock
The Future Is History: How Totalitarianism Reclaimed Russia by Masha Gessen
Stalin: The Court of the Red Tsar by Simon Sebag Montefiore
A people's tragedy : the Russian Revolution, 1891-1924 by Orlando Figes