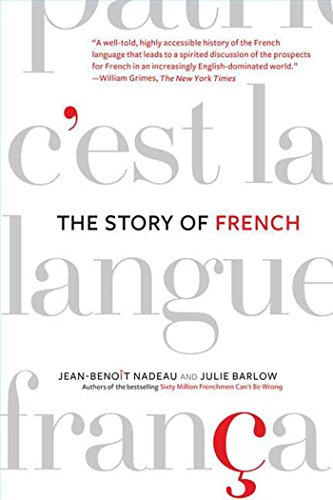 The Story of French

'The Story of French', like any good story, tells of spectacular failures and unexpected success. This is the story of the French language - second only to English for the number of countries where it is officially spoken. A language that is the official tongue of two G-7 countries and three European nations. A language with rules so complex that only a few people ever completely master it. Nadeau and Barlow show readers - through their own experiences of living and travelling to French-speaking countries - how the French language developed and changed over the centuries, how it came to be spoken in the Americas, Africa and Asia and how it gained and maintained its global appeal. Written in a chronological narrative spanning more than 10 centuries, from ancient French dialects of the 8th century to the present-day French spoken in Quebec, Algeria, Beirut and more.  While the story of the French language may have begun over a thousand years ago, it is far from over.… (more)

LibraryThing member shawnday
A superbly written exploration of the origins and evolution of a language. Written by a couple who have a passion for exploring the living usage, this book is an engaging read and highly recommended.
10 more
LibraryThing member Katya0133
As a double major in French and linguistics, this was right up my alley. This book traces the fascinating history of the French language, debunking myths and dropping interesting anecdotes along the way.
LibraryThing member Paulagraph
Francophile that I am (perhaps francophone, according to the authors' definition), I found this book about the French language fascinating from beginning to end. Nadeau and Barlow are comprehensive and thorough to the point of risking redundancy in their investigation of the history (past, present & future), structure (linguistics), culture, geopolitics, economics etc. of French. The authors' perspective is that of bilingual/ bicultural Canadians from Montreal, each having learned the other's mother tongue. Apparently, they alternate English and French at home, switching up at the beginning of each week. Their insider/ outsider stance as both native speaker and second language learner, coming from a French-speaking culture which is not that of France, causes them, I think, to investigate the language in a way that is fresh and exciting. This will become a "go to" book on my reference bookshelf I'm sure.… (more)
LibraryThing member NielsenGW
Currently, French is the fifth-most spoken language in the world. In the Middle Ages, it was the gateway to the aristocratic lifestyle and the lingua franca of the Western world. While it has been eschewed to the milieu of wine drinkers, film buffs, and expatriates, French is still as dynamic and contentious as it has ever been. There is even a group of people—the Academie Francaise—that presides over the language and sets the guidelines on new words and phrases that enter. Jean-Benoit Nadeau and Julie Barlow, in The Story of French, try to do what many other linguists have done before them: make the early history and morphology of a language interesting and relevant to modern readers.

In the early days of the French language (the 11th and 12th centuries), the land of the Franks was littered with languages. There was Breton, Angevin, Gascon, Savoyard, Limousin, and even Picard French. Early French evolved from the combination of the Langues d’oil (in Northern France) and the Langues d’oc (in the South). The Crusade sent many Frenchmen to the holy lands in the Middle East, and men from all over France had to communicate with each other and their leaders had to relay messages from the monarch to the men. This combined with the creation of the Kingdom of France in 1204 spawned a unified nation that needed a unified language. The 1634 creation of the Academie arose amid a need to preserve the culture and language of the French against incursions from other nations.

Apart from the history of the language, Nadeau and Barlow also look at the spread of French across the globe, either through natural expansion or through colonial means. French is spoken not just throughout Europe, but also in the US, Brazil, Madagascar, Djibouti, and Vietnam (and many, many other countries). In many respects, the cultural aspects of the French language are far more interesting than its linguistic history. How French and French-speaking peoples are depicted is equally engaging. For the most, the authors keep the topics relevant, well-paced, and scholarly. There are moments of digression into minutia, but there are neither intrusive nor incompatible with the rest of the text. Overall, this was a decent and not too thick read.… (more)
LibraryThing member mykl-s
I learned more than I expected about France, Canada, Senegal, Viet Nam and other parts of the world from this book. Barlow and Nadeau explain colonialism and a host of other topics in the process of covering the history of the French language. It is complete if you want to read it in full, and well organized if you want to find only the topics that interest you. Be warned, though, that you will be surprised at the topics the authors can make fascinating.… (more)
LibraryThing member edenz
Quite facinating. Really. It's about how history impacted the french language and visa-versa.
LibraryThing member alspray
I was immediately intrigued upon discovering this book. Five pages into the tome, I was wondering what ever I was thinking... a whole book about the history of the French language? But despite a tendency toward repetitiousness in driving home the key points, the book is a very interesting and engaging. 'Readable' comes to mind, though it doesn't do it justice. As a student of French, the story of how French came to be - and that I've already been unknowingly indoctrinated in "bon usage" - is fascinating, but the illustrative stories throughout keep it light and enjoyable. Well researched and eloquently written, I would recommend it to any amateur linguist or francophile.… (more)
LibraryThing member drmaf
Hard to believe now, when French has virtually been reduced to a boutique language for those who love French cinema, Edith Piaf, and being seen in fashionable Paris cafes, that it was once the Western world's no. 1 language. From the 16th to 19th centuries, anyone who had cultural or societal pretensions simply had to be conversant in French. Only the French themselves now regard their native tongue as a serious international language, although it is still ranked No. 5 in the world, after Mandarin, English, Spanish and Arabic. This book details how French gained its lofty position, and then lost it under a ferocious assault from that most unglamorous of languages, English, against which it is still fighting a desperate, but failing rearguard action, and does it in a most entertaining manner. A thoroughly enjoyable read.… (more)
LibraryThing member le.vert.galant
Made it about 2/3 the way through but I had to stop. What could have been an interesting book felt more like an advertisement.
LibraryThing member annbury
This book has a lot in it that is interesting and informative, but not as much as I had hoped. The first part of the book, on the history and development of the language in France, is useful if somewhat superficial -- and it does drive home the critical point that it was only after the mid-19th century that most French people could truly be said to speak French (for an exhaustive if exhausting discussion of the "Frenchification" of France, see Robb's "The Discovery of France"). The sections on the role of the Academy, and on the symbolism of the language as essential to France, were particularly interesting. The later part of the book, on the use of French outside of France, struck me as discursive and repetitive. Still, I learned a good deal from the book, and would recommend it to those who want an overall view of the language.… (more)
LibraryThing member jwlandry
Two part book on the French language. The first part is a potted history of the development of the French language that was just the right level of detail and well put-together. The second part is a discussion of the current state of French mixed in with a strident defense of the French language and a polemic against other languages, including English. The discussion of the influence of the Academie Francaise and the idea of the norm is quite interesting. Unfortunately, the book is unable to explain why we should trade the domination of English for the domination of French, especially when French-speaking countries are the most intolerant when it comes to minority languages. The amount of disdain shown to regional languages in France and to formerly widespread languages that are losing influence in the modern world like German or Russian is exceedingly hard to stomach. An interesting but flawed book.… (more)
Fewer

Sixty million Frenchmen can't be wrong : why we love France but not the French by Jean-Benoît Nadeau
Seven ages of Paris by Alistair Horne
How Language Works: How Babies Babble, Words Change Meaning, and Languages Liveor Die by David Crystal