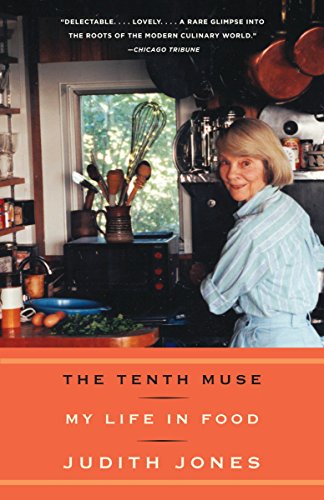 The tenth muse : my life in food

From the legendary editor who helped shape modern cookbook publishing-one of the food world's most admired figures-comes this evocative and inspiring memoir. Living in Paris after World War II, Jones broke free of bland American food and reveled in everyday French culinary delights. On returning to the States she published Julia Child's Mastering the Art of French Cooking. The rest is publishing and gastronomic history. A new world now opened up to Jones as she discovered, with her husband Evan, the delights of American food, publishing some of the premier culinary luminaries of the twentieth century: from Julia Child, James Beard, and M.F.K. Fisher to Claudia Roden, Edna Lewis, and Lidia Bastianich. Here also are fifty of Jones's favorite recipes collected over a lifetime of cooking-each with its own story and special tips. The Tenth Muse is an absolutely charming memoir by a woman who was present at the creation of the American food revolution and played a pivotal role in shaping it.… (more)

LibraryThing member betsyhoward
Wonderful glympse into another era -- the 1950's, Paris, culinary arts, Julia Childs' rise to fame--and the progression of cooking in America over the subsequent decades.
6 more
LibraryThing member alphaorder
With insights into both the culinary and publishing worlds, The Tenth Muse is the perfect gift for the foodie reader on your list - maybe even yourself. Judith Jones, an editor at Knopf for nearly a half century and the woman who started it all with Julia Child, has finally shared her own story, well-written (she is an editor after all), fun and well, delicious. Recipes included,… (more)
LibraryThing member willyt
This book is a nice,readable autobiography of a person who had a large role in improving American food culture in the latter part of the 20th-century. The author does a nice job of presenting how she got interested in food, her life in food, and her side of how many of the classic cookbooks (and diary of Anne Frank) published by Knopf came into being. At the end of the book, she prints a number of recipes that she has enjoyed, listed by groups such as "Cooking for One" or "The Nine Lives of Leg of Lamb".… (more)
LibraryThing member Carrie.deSilva
A personal and business biography of the publisher who took on Julia Child's Mastering the Art of French Cooking in 1959. The serious American writers are all here - James Beard, MFK Fisher, Edna Lewis et al. There are also some excellent recipes and the stories behind them. All in all a great read by a thoughtful, writer who has lived and worked with elegance.… (more)
LibraryThing member cygnet81
This is a great book about the love of food and quality ingredients. It is so interesting how Americans have changed the way we cook over the last few decades! It only gets a four star rating because there were a lot of names that made it confusing and the narrative jumped around a lot.
LibraryThing member auntieknickers
People who enjoyed Julia Child's memoir, [book: My Life in France] will probably enjoy this one as well. Judith Jones was Julia Child's editor and also worked with most of the other famous cookbook authors of that era. She was also married to food writer Evan Jones, with whom she did some cookbooks as well. Judith Jones enjoyed food from an early age, even though this was discouraged in her family, and when she first went to Paris in the late 1940s she fell in love, first with French food and then with Evan Jones. She also learned to cook and even helped run a clandestine restaurant in the apartment of a friend's aunt (who was unaware of the use). Jones's other claim to fame, which preceded her work with Child, was convincing Alfred A. Knopf to publish Anne Frank's [book: The Diary of a Young Girl}, which had already met with several rejections. Jones's book has just enough gossip to be interesting without making the reader feel grimy. The latter part of the book describes her and Evan's semi-retirement to Vermont, their food and gardening adventures there, and then her widowhood and why she cooks herself a real meal each evening. Many photographs add to the enjoyment and there are recipes at the end of the book. It doesn't take long to read, and is rewarding far beyond the time spent reading it.… (more)
LibraryThing member mirrani
When I went over to my grandmother’s house on the weekends, I would undoubtedly find myself making cookies or banana bread or some other such thing on one of the days we were together. For her it was something exciting, for me it was something to pass the time. I have very fond memories of walking in to her kitchen with all of the cooking gadgets and gizmos scattered on the counters, in cupboards and on shelves, but I never wanted to bother with any of it for myself. As I got older, I used the griddle to make pancakes the way we used to on Sunday mornings, but that’s about all.

Then I picked up The Tenth Muse and I instantly thought of my grandmother. I devoured the pages like I would her banana bread or blueberry pancakes and as I read on I came to realize exactly what all of this cooking stuff was all about. The book did not convert me. I will never want to go in a kitchen and whip up a simple or elaborate meal, but I have learned a new appreciation for the people who do have that desire to cook somewhere in their blood. Thankfully Judith Jones doesn’t insist that reading her book will make everyone run out and pick up a pot or a pan. She accepts that there are people out there who just don’t have a cooking gene and is okay with that, though she does say she hopes to see more young people cooking.

At first this statement upset me because I know from experience that you can’t force a love of cooking on anyone. I may have the fondest memories of my grandmother in her kitchen, but I am not going to run to my kitchen in order to relive them. After a while, though, I realized that the exposure to the kitchen is more about remembering the past, sharing time together, and enjoying yourselves than it is about making someone figure out how to boil potatoes or bake the perfect cake. I read stories of Julia Childe and all of the other famous folks out there who wrote cook books or encouraged people to take the time to feed their families in a wholesome way and I made a connection with my grandmother’s generation that I never thought was possible.

I can’t go to her now and tell her that all of this has happened for me, but I can remember what it was like to experience this realization and I can pass it on to other readers. I can recommend this book to anyone who has a willingness to relive a memory of family in the kitchen, I can tell the cooks out there that there are recipes in the back of the book, and I can let everyone know that the stories of publishing a wide variety of cookbooks will intrigue and delight readers of every variety. I never thought a book about cooking would touch me the way this one has. I never thought I would claim said book was a must read. This one falls into both of those. Enjoy.… (more)
Fewer

Provence, 1970 : M.F.K. Fisher, Julia Child, James Beard, and the reinvention of American taste by Luke Barr
My life in France by Julia Child
Tender at the bone : growing up at the table by Ruth Reichl
An omelette and a glass of wine by Elizabeth David
Feeding a Yen: Savoring Local Specialties, from Kansas City to Cuzco by Calvin Trillin
7 more
The art of eating by M. F. K. Fisher
Climbing the Mango Trees: A Memoir of a Childhood in India by Madhur Jaffrey
Between meals : an appetite for Paris by A. J. Liebling
The soul of a chef : the journey toward perfection by Michael Ruhlman
The man who ate everything : and other gastronomic feats, disputes, and pleasurable pursuits by Jeffrey Steingarten
The apprentice : my life in the kitchen by Jacques Pépin
Blood, bones, & butter : the inadvertent education of a reluctant chef by Gabrielle Hamilton
Fewer