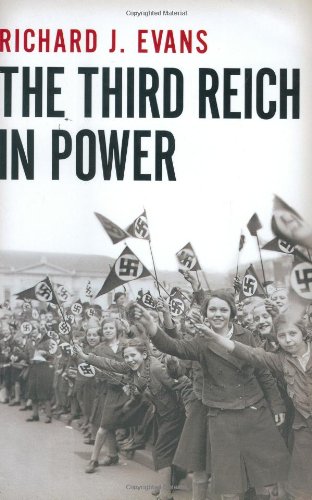 In this book, historian Evans tells of Germany's radical reshaping under Nazi rule. Every area of life, from literature, culture, and the arts to religion, education, and science, was subordinated to the relentless drive to prepare Germany for war. Evans shows how the Nazis attempted to reorder every aspect of German society, encountering many kinds and degrees of resistance along the way but gradually winning the acceptance of the German people. Those who were seen as unfit, including Jews, Gypsies, homosexuals, mentally ill, "asocial" and "habitual" criminals, were dealt with in increasingly brutal terms. After six years of foreign policy brinkmanship that took the Nazi regime from success to success, Hitler's drive to prepare Germany for the war he saw as its destiny reached its fateful hour in September 1939.--From publisher description.… (more)

Evans provides innumerable statistics on all facets of German social and cultural life to satisfy any scholar, while also managing to provide a readable narrative that never gets too bogged down in the figures.

Unlike some historians, he isn't interesting in taking on the role of moral arbiter; he has enough respect for the reader to let him make his own mind up about the material. Of course, he can't fail to mention the contradictions and irrationalities that defined the Nazi ideology and subsequent actions, but it's very hard not to!

There's a lot more to say about the book, but you'll learn a lot more from reading it than you ever could from a review. The only thing that needs to be said is that the three volumes are an ideal introduction to the complex and ever-changing climate that defined the Weimar Republic and the Third Reich, and should be required reading for any student who is new to this period in Germany's history.… (more)
LibraryThing member jorgearanda
An exhaustive, extremely informative account of life under the Third Reich. Evans' book covers the nazi approach to the economy, industry, propaganda efforts, racism, eugenics, political opposition, and foreign policy. At times it is a difficult and rather slow read, swamped by data and figures and considerations, but it's well worth the effort.… (more)
LibraryThing member Meggo
Make no mistake, this is a substantial book. Literally (at over 700 pages) and figuratively. Exhaustively researched and well written, the book traces the acts and impact of the Nazi party from 1933 to the outbreak of the war in 1939. From the Night of the Long Knives to Peace in Our Time, this book was chock full of historic occasions, insightful commentary and fascinating history. This one may cause bruising if you happen to fall asleep with it and drop it, but it's well worth the risk.… (more)
LibraryThing member HadriantheBlind
Part 2 of the trilogy. Describes the social programs and diplomatic maneuvers that happened once Hitler took power.
LibraryThing member Narboink
The second book in Richard J. Evans' Third Reich trilogy, "The Third Reich in Power," covers the life of Germany from 1933 through the invasion of Poland on September 1, 1939. Longer than its predecessor, and at times significantly drier, it nonetheless paints an intriguing portrait of daily life under the Third Reich. Most interesting are the descriptions of how the Reich was (as was not) able to leverage political and economic support from interests as varied as academia, labor, medicine, agriculture and manufacturing. The speed of the transformation of German society into a colossal war machine becomes comprehensible in large part because of the detail (often tiring in its ordinariness) assembled here.

The benefit of hindsight allows for the characters in this story, including the most die hard Nazis, to display an amazing ability to simultaneously defy and conform to stereotypes. It is, in the end, not enough to vilify the top Nazi bureaucrats and summarily indict them for their crimes; the infrastructure of society as a whole - its politics, values, pressures - must be illuminated as well to create a truly meaningful understanding of the catastrophe of Nazism. This Evans accomplishes with great skill. I look forward to the final book in the series, "The Third Reich at War."… (more)
LibraryThing member DinadansFriend
A very carefully researched book, with adequate illustrations, reasonable number of maps and charts, and very copious footnoting.
It claims to be a definitive History of the Germans 1928 - 45. This second volume of a trilogy , covers the domestic scene from 1933 to Sept. 1939. There is not any military detail, but his scope is about the actual society that the Nazis tried to create and control. I think the claims of this book are well founded.… (more)
LibraryThing member bke
The second of three volumes of what will probably become the definitive history of the Third Reich. This Chronicles Nazi Germany from the Nazi seizure of poser to the invasion of Poland. If you are at all interested in Germany or European history of the 20th century, this is a must-read.
LibraryThing member MarcusBastos
The Totalitarian Experience
In his second book of the trilogy about the Third Reich, Richard Evans describes the german state, its main features and institutions. A police state that implemented terror, murder and despised the law. The arrival of the nazism to power, so argued the author, was accompanied with massive propaganda and the abolition of individual rights. There was no valid law against the desire of state agents. The politics enemies (communists and social-democrats) and minorities (homosexuals, non-arians and jews) are purged. Nazi's project is put into practice. The german territorial expansion begins with the invasion of Austria and Czech Republic. All this are covered by the book that ends in the beginning of the second world war (invasion of Poland). A great description of a modern totalitarian experience.… (more)
LibraryThing member ffifield
The second of a three book survey of the Third Reich. This book covers what the Nazi regime's plan legitimate acquisition of power and how they consolidated that power. It's not just the politics that lead to their land grabs but also the buildup of their military, as well as their influence on culture, economics, art, music, and social life.… (more)
LibraryThing member Schmerguls
This is the second volume (published in 2005) of Evans' trilogy. I read the first volume, The Coming of the Third Reich, on 9 Oct 2009. This volume extends from tthe summer of 1933 to Sep 3, 1939, and traces how the Nazis took over Germany, body and soul, during that time. It is not pleasant nor easy reading, at least until the final chapters when the way Hitler drove to war is set out , which reading while not pleasant expounds the way Hitler sought to have war, even though his brain-washed people still did not want such, in contrast to the giddy German joy in July 1914.… (more)
Fewer