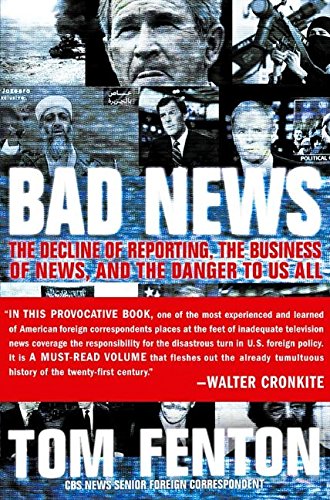 Bad news : The decline of reporting, the business of news, and the danger to us all

At a time when the world has been blindsided by failures of intelligence, a veteran CBS News correspondent reveals how the news media has betrayed our trust and endangered our democracy. Tom Fenton is the senior European correspondent for CBS News. In his long journalistic experience, he has reported on everything from the fall of the Shah of Iran to the crumbling of communism in East Germany to the bombing of Israel during the first Gulf War. Today he has covered the movements of al Qaeda throughout Europe-a story he was tracking before 9/11. And in the three years since, he has come to a sobering realization: the American news media-and network TV news in particular-has abdicated its responsibility to the American people. As Fenton points out, much of America still gets its news from the networks. But in the years leading to 9/11 the coverage of terrorism was sporadic at best, focusing on acts of terror rather than the people and movements that caused them. It was Washington's job to connect the dots, Fenton argues, but it was the news business's job to track the story and watchdog the government's vigilance-and both sides failed. "By the time of the Bush-Kerry election," Fenton writes, "for the first time, the news media had an even worse credibility gap" than the government's. Lulled into complacency by the Cold War, gutted by corporate bottom-lining bottom feeders, the news media missed the story of the century-just as they'd missed hundreds of others in the years before, from Kosovo to Chechnya. As a frequent voice in the wilderness himself-who tried unsuccessfully to interest CBS in an Osama bin Laden interview in the 1990s-Fenton charges that the news media must change its perspective from that of an entertainment-industry offshoot to that of a keeper of the public trust. And he argues that his industry must foster a new patriotic skepticism, one that will both inform the people and help Washington defend the country better. Tom Fenton's passionate argument for change in the political sector is being embraced by readers on all sides. Since its publication in the United States Bad News has won wide and critical acclaim from such publications as Publisher's Weekly, Washington Post, and Christian Science Monitor.… (more)

It's even worse than it looks : how the American constitutional system collided with the new politics of extremism by Thomas E. Mann
Bush at war by Bob Woodward