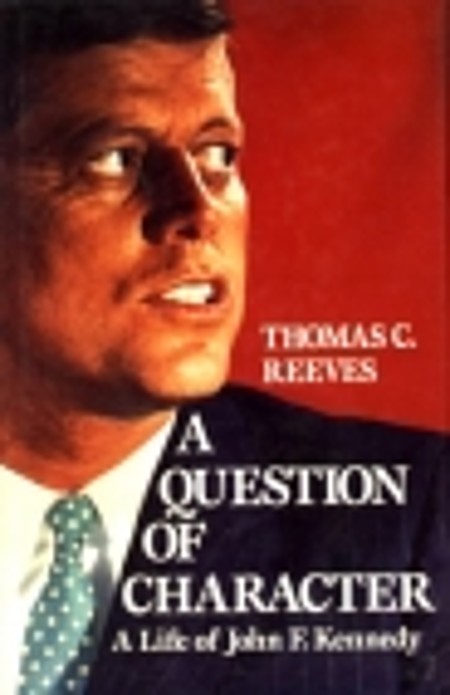 A question of character : a life of John F. Kennedy

No issue is more hotly debated than how, or even if, a politician's private life affects his public competence. InA Question of CharacterJohn F. Kennedy's two lives—public and private—are examined to answer this timely question. Respected historian and biographer Thomas C. Reeves reveals discrepancies between JFK's public persona, which has reached mythic proportions, and his scandalous private behavior. Most illuminating is the constant theme or Joe Kennedy's almost total control of JFK's behavior and politics throughout most of his son's career. "The John Kennedy who emerges from these pages was not a man of good moral character. He was reared not to be good but to win." —Los Angeles Times Reeves has provided the most truthful and balanced assessment of John F. Kennedy to date. Written more in sorrow than in anger,A Question of Characterexplores the sensitive and difficult question of how people, and history itself, ought to judge the relationship between personal character and national leadership.… (more)

LibraryThing member gmillar
I don't think it's a "must read", but the style is quite readable and fairly easy to digest. The discussions on the happenings of the time could be considered "revealing". I rather think that they are available from all sorts of sources, most of which would be dispassionate statements of fact. Mr Reeves gives his opinions and shares the opinions of others too. That makes the book interesting for me. When lives are presented in this way, with author comment, they have to be treated with some scepticism and several sources should be read to get a better balanced truth. I'll keep it in my collection.… (more)
4 more
LibraryThing member the.ken.petersen
Well, there goes another of my schoolboy heroes. Usually, i can dismiss these character assassinations as the bitterness of the jealous. Sadly, in this case, that does not work. Thomas Reeves says that he was a Kennedy admirer and, in the way that he writes, one can see that he was.

Kennedy comes across as a man dominated by his father, Joe. A man more interested in the gaining and holding of power than with any clear idea as to how to use it. He was sympathetic to black rights movements, but more concerned with balancing the votes from southern bigots and northern liberals, than in dealing with the problem. His greatest moment came, just months before his death, when Russia threatened to put nuclear missiles in to Cuba. It took a man with the cold iron will of Kennedy to stand up to the threat.

This book is authoritatively written and includes many references to back up its claims. It is not a spiteful destruction of the man, simply a quelling of the popular 'superman' myth. The subject is Kennedy, the man and the President and his high profile death is hardly referred to, this is already the subject of many conspiracy theory books.

Unfortunately, I believe this to be a true representation of John F. Kennedy.… (more)
LibraryThing member KristySP
This book was okay... i enjoyed the juicy insight into Ambassador Joe and the Kennedy personal lives, but the overall pacing was rather clunky.
LibraryThing member neddludd
What one discovers in this work is obsession. Joseph Kennedy, the dynasty's founder--and a scoundrel--dreamed that his eldest son would become President. When JFK's older brother died in WWII, Joe shifted his goal to John and bought him a House and Senate seat (even though JFK asserts how much he loathes politics). Joe was involved in every aspect of creating JFK's political persona. He also served as a model in terms of womanizing. Joe would constantly have mistresses, and sometimes they would live in his home with Rose, his wife, forced to ignore his floozies. Joe thought nothing of sampling the girlfriends of his sons or his employees, and Jack followed this licentious model throughout his life. Once when Jackie was delivering a child in Boston, JFK was on a boat with whores in the Mediterranean. Other titbits include what a son-of-a-bitch Bobby was in service of the family. Ideology was not important in this family; the only thing that mattered was power. Aspects of positive qualities also emerge; for example, the skill with which JFK handled the Cuban Missle Crisis and his courage. Importantly, this book is sourced only with secondary sources; the Kennedy Library refuses to release anything that compromises or besmirches Camelot. Jack is portrayed as a mediocre politician virtually until the last year of his presidency. The key to this improvement, it is suggested, is that a stillborn son finally broke through JFK's emotional barriers and he became less one-dimensional. Thus, even though he sympathised with the civil rights revolution he did so only because he had to politically. Lurking in the background is a malevalent J. Edgar Hoover, who essentially blackmailed the family against taking any positions--for instance, supporting Martin Luther King, Jr.--that Hoover did not agree with. As the FBI director aged he became ever more reactionary and he deemed Martin Luther King as a dangerous Communist. This book is a bit dated; it is Interested, but also naive and moralistic.… (more)
LibraryThing member bookmarkaussie
A very interesting biography that asks the question was John F. Kennedy the same man as the one presented to us? It looks at his Father and his influence, his upbringing and his war service, his personal and his political life and finally his Presidential career. Overall I thought the Author was tough but fair, he pointed out the flaws within the stories told about his life, but everything was based on facts. What I thought was interesting is that his life and career up until he became President seemed a very bad preparation for the Presidency. But he did seem to grow in the role. Not always in ways I agree with politically and he certainly behaved very irresponsibly in his private life. Something that only had consequences after his death. If your interested in a critical but still respectful biography on John F. Kennedy then I would recommend this book.… (more)
Fewer

President Kennedy profile of power by Richard Reeves
Kennedy & Nixon : the rivalry that shaped postwar America by Christopher Matthews
Richard Milhous Nixon : the rise of an American politician by Roger Morris
The death of a president, November 20-November 25, 1963 by William Manchester
Means of ascent by Robert A. Caro
2 more
President Reagan: The Role of a Lifetime by Lou Cannon
Robert Kennedy and his times by Arthur M. Schlesinger
Fewer