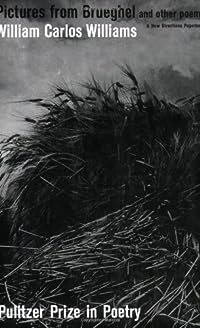 Pictures from Brueghel and other poems : Collected Poems 1950-1962

This collection makes available work of one of our greatest American poets in the last decade of his life. The first section,nbsp;Pictures from Brueghel, contains previously uncollected short poems, while the second and third parts are the complete texts ofnbsp;The Desert Musicnbsp;(1954) andnbsp;Journey to Lovenbsp;(1955), originally published by Random House. In these books, Dr. Williams perfected his "variable foot" metric and achieved full mastery of the "American idiom" which was his lifelong first concern. Among the poems of this period is the long "Asphodel, That Greeny Flower" which W. H. Auden has called "one of the most beautiful love poems in the language."nbsp;Pictures from Brueghelnbsp;was awarded the Pulitzer Prize for Poetry only two months after William Carlos Williams' death on March 4, 1963.… (more)

LibraryThing member jonfaith
The poem
if it reflects the sea
reflects only
its dance
upon that profound depth
where
it seems to triumph.

Reading these poems this frozen afternoon, I sensed almost a dislocation and then swift reconstruction of my faculties. WCW was offering me thinking lessons. My congery of indifference may be sliding towards despair but I harbor a measured hope. The early miniatures required a few readings. I discovered some kinship reading about the farmers with their scythes and reflecting that the wheat-shearing scene in Anna Karenina was Proust's favorite. The later poems depict an aging poet finding joy at the limits of his craft. There’s perhaps a shared warmth in muted loneliness.… (more)